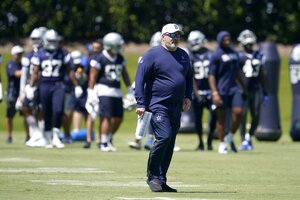 FRISCO, Texas (AP) — The Dallas Cowboys are still losing ground in a COVID-19 outbreak that was discovered just 90 minutes before their most recent preseason game.

With two weeks left before the opener, coach Mike McCarthy isn’t sure how to assess what it means for the Sept. 9 matchup against Tom Brady and Super Bowl champion Tampa Bay.

“This is the climate we’re in. The great thing is we have experience at it. We’re prepared to handle this. We’re very fortunate with our facility, the spacing of it, it’s not a challenge. We’ve been able to adjust meetings seamlessly. At the end of the day, you want the flow and the continuity of your workday to not affect your players. I feel that that’s not happening.”

The Cowboys have five players on the COVID-19 list in Williams, Kazee and two other projected starters in receiver CeeDee Lamb and defensive tackle Carlos Watkins, along with safety Malik Hooker.

Defensive coordinator Dan Quinn also is away from the team because of health and safety protocols. A sixth player, undrafted rookie safety Israel Mukuamu, was activated from the list and returned to practice Wednesday.

Watkins and Quinn were the first to be pulled from the team setting, just before the 20-14 preseason loss to Houston on Saturday. Lamb, Hooker and Mukuamu joined them before practice resumed this week.

Williams practiced Tuesday, while Kazee was sidelined before he had been identified as another player going through additional testing.

The Cowboys also were without cornerback Trevon Diggs on Wednesday because of a non-COVID-19 illness, McCarthy said.

“That’s kind of weird and scary, obviously kind of scary to me, as you can get the vaccine and you can still catch COVID,” said star running back Ezekiel Elliott, who had COVID-19 early in the pandemic and is vaccinated. “It just shows that we can’t let our guard down.”

When announcing that Watkins and Quinn had been sent home from the stadium Saturday, the Cowboys said 93% of players were vaccinated along with all of the football staff.

Three days later, owner Jerry Jones — outspoken in his support of bringing back fans last year while many stadiums were empty — made his strongest statement so far in support of vaccines.

NFL protocols allow vaccinated personnel to return after two negative COVID-19 tests 24 hours apart, while unvaccinated players are required to stay away at least five days even if they are deemed close contacts, regardless of their testing status.

“Everyone has a right to make their own decisions regarding their health and their body,” Jones said on his radio show. “I believe in that completely until your decisions as to yourself impacts negatively many others. Then, the common good takes over. We have got to check ‘I’ at the door and go forward with ‘we.’ Your Dallas Cowboys are doing that.”

The Cowboys are without their other projected starting safety in Donovan Wilson, who left practice Tuesday with a groin injury. McCarthy said he didn’t know the severity.

At the moment, Dallas has five safeties available for the preseason finale at home against Jacksonville on Sunday. The most experienced in that group, Darian Thompson and Jayron Kearse, might have to play more than the Cowboys would prefer.

McCarthy said he wasn’t sure who might be activated off the COVID-19 list before Sunday, Quinn included.

“Everybody’s status is different based on the level of testing,” McCarthy said. “There’s so many variables to this. I just operate on day by day and make sure everybody’s getting the support that they need.”

NOTES: QB Dak Prescott had his most extensive work since pulling himself from practice July 28 with a strained right shoulder. Prescott made throws in 7-on-7 and 11-on-11 work. The club has maintained Prescott will start the opener. … K Greg Zuerlein’s field goal attempts were erratic in his training camp debut Wednesday coming off back surgery. He is expected to play against the Jaguars.