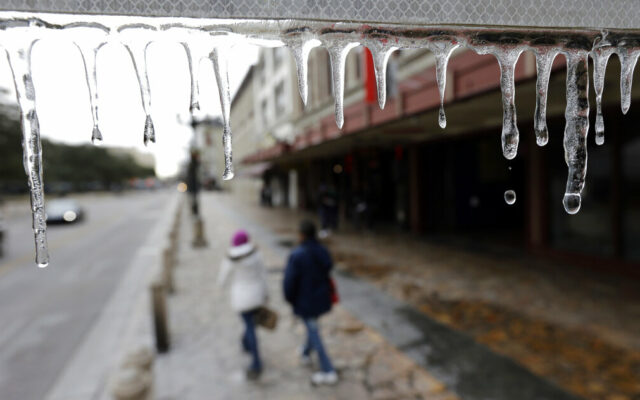 SAN ANTONIO (KTSA News) — While San Antonio is expecting the harshest winter weather conditions of the season yet, local and state officials are working to mitigate any potential issues that may arise.

National Weather Service Meteorologist Aaron Treadway said that San Antonians can expect a bit of rain ahead of the cold front that will hit the area tomorrow, noting that gusty winds up to 30 mph are expected to accompany the drop in temperatures and stick around through Friday.

“We’re expecting wind chills [Friday and Saturday] mornings in the teens and in the single digits,” Treadway said. “So it’s going to be very, very cold.”

The biggest factor separating the impending inclement weather from the historic winter storm that ravaged the state one year ago is the overall length of time the area will see freezing temperatures linger, Treadway said.

The meteorologist said while the winter weather and colder temperatures may linger through next week, the actual below-freezing temperatures will blast the area for a 24 to 30 hour period, instead of over the course of days like last February.

The arctic blast is expected to bring some wintry precipitation, mostly concentrated between Thursday and Friday when the temperatures are expected to drop to their lowest point, but Treadway said most of the potential for frozen precipitation will be north of San Antonio into the Hill Country.

At a press conference in Austin Tuesday morning, Governor Greg Abbott said the state is expecting the high level of energy demand to be Friday morning.

“Today, right now, the prognostication is that ERCOT will have an excess of 15,000 megawatts of power available even at the time of highest demand,” Abbott said. “So ERCOT is well prepared for conditions as they currently stand, but remain flexible in order to be able to be responsive to power demand needs.”

The San Antonio Water System CEO Robert Puente said that they prepared and do not anticipate issues with water delivery, as the infrastructure is mostly underground. He noted that residents should cover exposed pipes and allow faucets to drip to ensure they do not burst.

Our crews are out pretreating around the San Antonio region today in preparation for the upcoming winter weather. Please slow down and give the crews space as they perform this operation. #WinterWeather pic.twitter.com/UH6jTXwo97

San Antonio Police Chief William McManus said they will work with TxDOT to assess the conditions of the roads and to determine whether highways and overpasses should be closed. Police will patrol and conduct investigative activities as normal.

Overnight shelters will open for the homeless population or those without heat and the city will provide clarity on warming centers by tomorrow afternoon.

Bexar County is will open six warming centers tomorrow through Saturday located at:

Aminal Care Services recommends that people bring their pets inside and will the department will be on patrol to address violations of city ordinances related to pets.

ACS said that residents not able to bring pets directly inside should set up a contained space in the garage or detached space like a laundry room with food, water and blankets to keep them warm.

Residents are encouraged to report downed trees and malfunctioning traffic signals to 3-1-1.