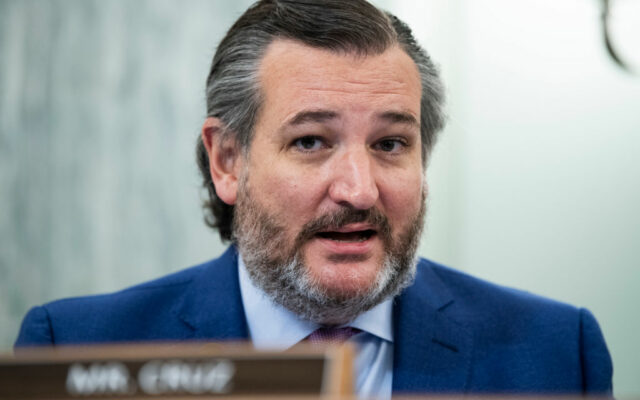 SAN ANTONIO (KTSA NEWS) -Senator Ted Cruz refused a request from a reporter to wear a mask during a news conference Wednesday.

When he stepped up to the microphone, a reporter asked,”Would you mind putting on a mask for us?”

Cruz replied,” Yeah, when I’m talking to the TV camera, I’m not going to wear a mask.  All of us have been immunized.

The reporter is heard saying,” It’d make us feel better,” to which Cruz responded,” You’re welcome to step away if you’d like.” The Republican Senator from Texas added,” The whole point of the vaccine -CDC guidance is what we’re following.”

The Centers for Disease Control and Prevention advises that fully vaccinated people “can start to do some things that they had stopped doing because of the pandemic.”  However, the CDC advises,”you should keep taking precautions in public places like wearing a mask, staying 6 feet apart from others and avoiding crowds and poorly ventilated spaces until we know more.”

People are considered fully vaccinated 2 weeks after their second dose in a two-dose series, such as the Pfizer or Moderna vaccine, or two weeks after a single-dose of the Johnson & Johnson vaccine.

The following tweet from 911 includes video of the exchange between Cruz and the reporter:

REPORTER: “Would you mind putting on a mask for us?”

CRUZ: “Yeah, when I’m talking to the TV camera, I’m not going to wear a mask. All of us have been immunized.”

CRUZ: “You’re welcome to step away if you’d like.” pic.twitter.com/0d0rvz0OAJ