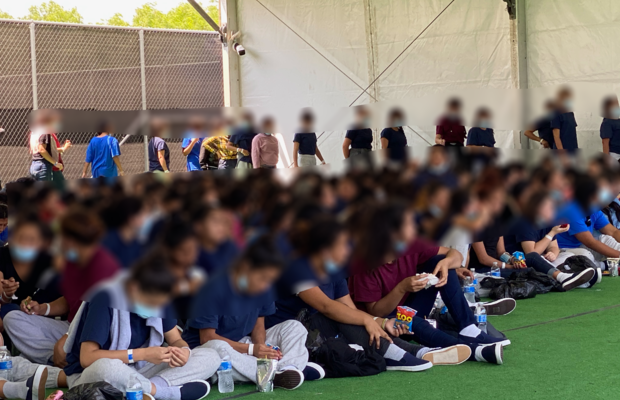 “Border Patrol does not want to keep people there longer than 72 hours,” Cuellar said in an interview with “Face the Nation” about migrant children being held at border detention centers. “But there’s two issues, two factors coming into play. One, there are so many — there’s a large number of people coming across every single day, groups of over 100 individuals coming in into the Border Patrol custody, number one. Number two, the flow through, that is through HHS, they’re moving and they’re trying to get more shelters open.”

While journalists have been blocked from accessing the sites themselves, Cuellar provided to CBS News photos from a Border Patrol facility in Donna, Texas, some of which show children with foil blankets waiting to be processed. Other images from the Texas Democrat show families under a bridge in McAllen, Texas, at a temporary processing site as they wait to get into a holding facility. More photos show scores of young girls who Cuellar said have been held at the border facility for days, far longer than the legal limit of 72 hours that border officials have to turn over unaccompanied minors to the Department of Health and Human Services’ Office of Refugee Resettlement, which is responsible for housing the children.

The Biden administration has for the past few weeks been grappling with the swell of migrants crossing the southern border, including families with young children and unaccompanied minors who arrive alone. The influx of migrant children and families has left immigration authorities struggling to secure shelter space for unaccompanied minors taken into custody by immigration authorities, leading to overcrowding in Border Patrol facilities.

As of Friday morning, the U.S. was housing 12,500 unaccompanied children in shelters and at emergency sites, while another 5,500 were being held in Border Patrol facilities. To alleviate the strain on bed capacity, the Biden administration has found at least nine emergency sites to house unaccompanied minors in border detention facilities, which are not meant to hold children.

President Biden told reporters during a press conference Thursday that migrant families “should all be going back,” and top members of his administration have repeatedly warned the U.S.-Mexico border is closed.

While Mr. Biden and senior administration officials have blamed the Trump administration for effectively dismantling the federal immigration system, the Biden administration has kept in place a public health order issued by former President Donald Trump in the early days of the coronavirus pandemic to immediately expel most migrants seeking asylum in the U.S. Still, teenagers and children from Central America crossing the border alone have been allowed to stay, as have families with younger children.

“Adults are pretty much returned,” Cuellar said. “You know, 71% out of the 100,000 people that passed in in February are adults. Those are being returned, expelled back. Some family units are turned back into Mexico depending on the age of the kids. Thirteen and above are being returned.”

But Cuellar said 2,000 migrants have been released into the U.S. without a notice to appear at an immigration court.

“They’re supposed to appear, show up, maybe in 60 days, report to an ICE office,” he said. “This is unprecedented.”

The family units being released into the U.S. are placing a burden on border communities, said Cuellar, whose Texas district includes areas along the U.S.-Mexico border.

“The cities, the counties, the NGOs, we’re feeling the brunt of what’s happening with the family units,” the congressman said. “Unaccompanied kids are different. Those are taken under the HHS.”

Mr. Biden has sought help from Mexican President Andrés Manuel López Obrador to stem the crisis at the U.S.-Mexico border, and the president sent an envoy to Mexico last week to discuss a plan to manage the influx of migrants. Mr. Biden has also tapped Vice President Kamala Harris to lead the administration’s work to stem migration at the border.

Cuellar said Mexico “can do more” to help the U.S., and added that he has not spoken to the vice president since November, though he has talked with Homeland Security Secretary Alejandro Mayorkas and others at the White House.

“Certainly myself, the other congressmen down here, Congressman Vicente Gonzalez and of course, Vela, Congressman Filemon Vela, we all want to be helpful to the vice president,” he said. “I’m glad that the president put the vice president in charge, because we need somebody that can look at the comprehensive view of what we’re seeing here. It’s not a simple solution.”