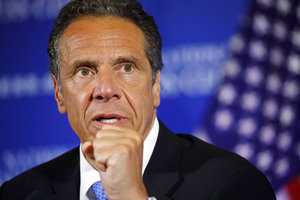 FILE - In this May 27, 2020, file photo, New York Gov. Andrew Cuomo speaks during a news conference at the National Press Club in Washington. Cuomo used a Wednesday, Aug. 19, 2020, appearance on public radio to offer the failure of New York to institute a statewide mask mandate earlier as an example of a lesson for other states. "I was the first person in the nation to do masks. I should have done masks earlier," Cuomo said on WAMC. "That would have made a dramatic difference. (AP Photo/Jacquelyn Martin, File)
▶ Watch Video: Latest accusation against Governor Cuomo referred to police
New York Governor Andrew Cuomo faced growing pressure to resign on Thursday, as the state’s assembly speaker authorized an impeachment investigation into the allegations of misconduct he’s facing. New York State Assembly Speaker Carl Heastie said he authorized the Assembly Judiciary Committee to begin the investigation, which he said will have the power to interview witnesses and subpoena documents.

The New York attorney general’s office confirmed Thursday night that the assembly’s investigation would not impact their own independent investigation into the sexual misconduct claims against Cuomo.

The investigation comes as more than 55 lawmakers said in a letter Thursday that they want the governor out.

“The budget, the fight against COVID-19, and restarting the economy all depend on clear and trustworthy leadership,” the letter said. “In light of the governor’s admission of inappropriate behavior and the findings of altered data on nursing home COVID-19 deaths he has lost the confidence of the public and the state legislature, rendering him ineffective in this time of most urgent need.”

Mayor Bill de Blasio has also called on Cuomo to resign. “It is disgusting to me, and he can no longer serve as governor,” the mayor said Thursday.

Cuomo said last week that he would not resign, but his office pledged to cooperate with the attorney general’s investigation.

The calls for resignation comes as Cuomo is facing a new allegation of sexual misconduct reported by The Times Union of Albany. The reporting is based on an anonymous source who the Times Union said has “direct knowledge” of another woman’s claim.

The source told the Times Union that after watching Cuomo hold a press conference on another allegation of sexual misconduct, a female aide to Cuomo became upset and told a supervisor that the governor groped her. The aide reportedly claimed Cuomo summoned her to the executive mansion to help him with a technical issue involving his mobile phone, before reaching under her blouse and fondling her.

The aide, who has not been identified, has not filed a report, according to The New York Times.

Cuomo denied the allegations, writing in a statement that “I have never done anything like this.” Cuomo called the details “gut-wrenching.”

“I am not going to speak to the specifics of this or any other allegation given the ongoing review, but I am confident in the result of the attorney general’s report,” the governor said.

Albany police said Thursday that they were notified of the allegations by the New York State Police and the governor’s office, according to the Times. Police officials said the alleged conduct may have risen “to the level of a crime,” but said that does not mean the department has opened a criminal investigation, the Times reported.

Cuomo’s acting counsel confirmed to CBS News that the allegation had been referred to police.

“As a matter of state policy when allegations of physical contact are made, the agency informs the complainant that they should contact their local police department. If they decline, the agency has an obligation to reach out themselves and inform the department of the allegation,” the attorney said.

“In this case the person is represented by counsel and when counsel confirmed the client did not want to make a report, the state notified the police department and gave them the attorney’s information,” she added.

The Times Union report is one of many claims of sexual harassment leveled against the governor in recent weeks. Last week, another former Cuomo aide detailed her own sexual harassment allegations against Cuomo in an exclusive interview with Norah O’Donnell.

Charlotte Bennett alleged that Cuomo asked her inappropriate questions about her sex life, including whether she would consider dating an older man. Cuomo said he “never made advances” towards Bennett, but has apologized for some of the comments he has made throughout his tenure.

“I never knew at the time that I was making anyone feel uncomfortable,” Cuomo said. “I never, ever meant to offend anyone or hurt anyone or cause anyone pain. I feel terrible that these people felt uncomfortable, felt hurt, felt pain from the interactions, and I’m embarrassed by it, and I feel bad from it.”