Cuomo’s message to his daughters: ‘Your dad made mistakes’ 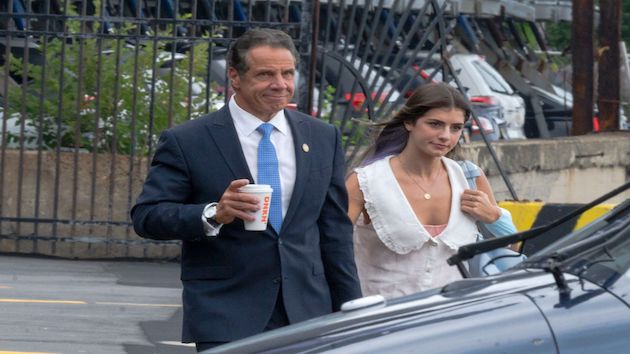 NEW YORK, NEW YORK - AUGUST 10: New York Governor Andrew Cuomo (L) and Michaela Kennedy-Cuomo are seen at the Eastside Heliport in Midtown on August 10, 2021 in New York City. Cuomo announced today that he will be resigning from office after a report released by the New York Attorney General's office found he had sexually harassed 11 women. (Photo by Gotham/GC Images)

(NEW YORK) — In an otherwise defensive speech announcing he would resign amid sexual harassment allegations, New York Gov. Andrew Cuomo turned especially emotional when speaking about the women he called his “three jewels” — his daughters.

“Let me say this on a personal note,” Cuomo said near the end of his remarks, and now, near a sudden end to his third-term. “In many ways, I see the world through the eyes of my daughters. Cara, Mariah and Michaela. They are 26 and 26, twins. And 23. And I have lived this experience with and through them.”

Although it wasn’t clear what part, if any, they played in his decision, he said he had closely watched their reactions as the allegations became public.

“I have sat on the couch with them, hearing the ugly accusations for weeks. I have seen the look in their eyes and the expression on their faces, and it hurt,” he continued.

“I want my three jewels to know this: My greatest goal is for them to have a better future than the generations of women before them. It is still in many ways a man’s world. It always has been,” he said. “We have sexism that is culturalized and institutionalized.”

Cuomo went on to say that he hopes better for his daughters — who, he said, are better than he is.

“My daughters have more talents and natural gifts than I ever had. I want to make sure that society allows them to fly as high as their wings will carry them. There should be no assumptions, no stereotypes, no limitations,” he continued.

“I want them to know from the bottom of my heart that I never did, and I never would, intentionally disrespect a woman or treat any woman differently than I would want them treated. And that is the God’s honest truth,” he said.

“Your dad made mistakes, and he apologized, and he learned from it,” he continued. “And that’s what life is all about.”

Cuomo, who is divorced, has appeared close to his daughters through the years, even bringing them up as frequent guests during his press conferences on the pandemic. In October, he teamed up with daughter Mariah to launch a mask campaign in the state.

His youngest daughter, Michaela, was photographed leaving with Cuomo in a helicopter after he announced his resignation.

After saying he had apologized to them, Cuomo, a Democrat, pivoted to his attempt to instill faith in the political process, acknowledging the “disappointment” his own daughters may have with it.

“And I know the political process is flawed, and I understand their cynicism and distrust and disappointment now. But don’t give it up. Because government is still the best vehicle for making positive social change,” he said.

Cuomo’s resignation will be effective in two weeks, he said. Lt. Gov. Kathy Hochul, poised to succeed Cuomo, would be the first female governor in the state’s history.