Dallas’ police chief resigns, will stay through end of year 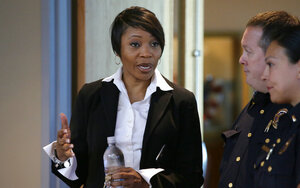 FILE - In this Sept. 7, 2017 photo, Dallas Police Chief U. Reneé Hall talks during an applicant processing event at police headquarters in Dallas. Hall resigned Tuesday, Sept. 8, 2020, following concern from the mayor and city council members over her leadership and the department's handling of recent protests. A city spokeswoman says Chief Hall will step down on Nov. 10. (AP Photo/LM Otero, File)

DALLAS (AP) — U. Reneé Hall, the first Black woman to lead the Dallas police force, submitted her resignation Tuesday but agreed to stay on through the end of the year.

Hall’s resignation letter, which the city provided to The Associated Press, didn’t give a reason for stepping down. She did not respond to a request for comment.

Hall is the latest in a parade of big city chiefs to resign or retire amid the protests and unrest that have swept the county since George Floyd, a Black man who was on the ground and handcuffed, died in May after a white Minneapolis police officer pressed his knee on Floyd’s neck for several minutes.

Catherine Cuellar, a city spokeswoman, originally said City Manager T.C. Broadnax accepted Hall’s resignation effective Nov. 10, but later said the chief had agreed to Broadnax’s request that she continue leading the department through the end of the year.

“When you review Chief Hall’s Dallas record, there aren’t enough superlatives to describe the impact she’s had here,” Broadnax said in a statement.

Hall, 49, wrote in her resignation letter that Dallas police have dealt with “an unthinkable series of events” since she took office in 2017. She said she’s proud of how the 3,000-officer department “coped” and “implemented critical reforms.”

Hall came to Texas from Detroit, the year after a sniper fatally shot four Dallas police officers and one transit officer during a protest in July 2016. Police ultimately killed the gunman with a robot-delivered bomb.

During Hall’s tenure, a Dallas officer was convicted of murder for the high-profile 2018 shooting of her neighbor, and even before the coronavirus pandemic the city was struggling with an increase in violent crime.

Dallas city councilors and the mayor have recently been critical of Hall’s leadership during the protests, which included police arresting hundreds of people who’d marched onto a city bridge, only to drop charges against nearly all of them.

Last month, the police department issued a report that found it struggled with operational plans, communication and maintaining a centralized command structure during days of protests.

Mayor Eric Johnson said he has not spoken with Hall, but “was not terribly surprised” by her resignation.

“We cannot exclusively rely on law enforcement to reduce crime, but we absolutely need new policing strategies and fresh eyes that can help us reverse the unfortunate and unacceptable increases in violent crime in our city,” Johnson said in a statement.

Since Floyd’s death, police chiefs have stepped down for various reasons in Seattle, Atlanta, Portland, Oregon, and Richmond, Virginia. In Rochester, New York, on Tuesday top police leaders announced their retirements amid nightly protests over the handling of the suffocation death of Daniel Prude in police custody.

Hall’s predecessor in Dallas, David Brown Sr., became the superintendent of the Chicago Police Department this spring, and her resignation letter hints that she will continue police work elsewhere.

“I will remain committed to my true calling which is law enforcement,” she wrote.

The headline of this story has been corrected to show Hall will remain in the post through year’s end and will not leave Nov. 10.