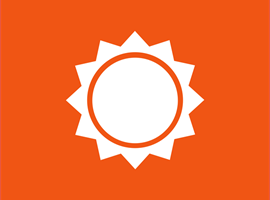 AccuWeather meteorologists are monitoring the potential for rounds of flooding rainfall and severe weather that are expected to erupt across portions of the Plains this weekend into early next week. After a below-average number of tornadoes in the month of April 2021, conditions are coming together for an active severe weather pattern in mid-May.

There were just 73 tornadoes reported across the United States in April, well short of the three-year average for the month of 224, according to the Storm Prediction Center. May has already produced more than 100 tornado reports.

Violent thunderstorms ravaged portions of southern Louisiana late Tuesday night into early Wednesday morning, bringing down trees and power lines across much of the Uptown portion of New Orleans. Farther west, flooding downpours and high winds wreaked havoc on eastern Texas where a wind gust of 48 mph was recorded in Huntsville, Texas, located about 70 miles north of Houston. 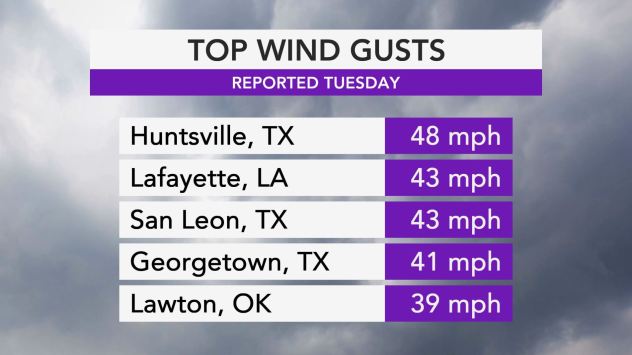 Experts say more rounds of flooding downpours and severe weather are expected this weekend and into early next week. However, the area being targeted will be centered over portions of the southern Plains rather than the Southeast. 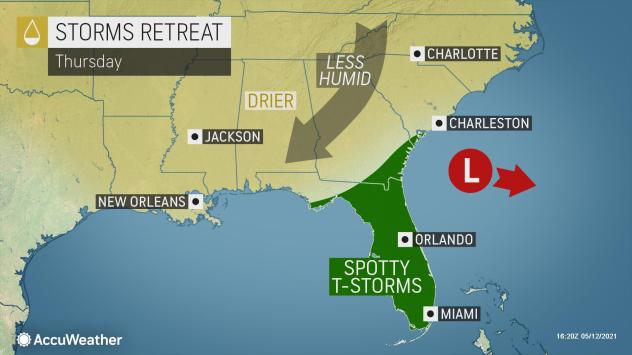 This will come as a relief to residents in waterlogged portions of the Southeast as a broad area of high pressure centered over the Great Lakes will allow portions of the region to start the process of drying out.

As high pressure builds in the East Friday, a southeasterly flow will begin to set up across much of the southern Plains. Moisture from the Gulf of Mexico will be allowed to move north into portions of Kansas, Missouri, central Illinois and portions of central Indiana, which will set the stage for thunderstorms and heavy rainfall to spread across the region.

“A series of weak disturbances are expected to track eastward from the Rockies and into the Plains Friday through the weekend,” AccuWeather Senior Meteorologist Brett Anderson said.

One of these weak storms that will move out of the Rockies will bring the threat for locally severe thunderstorms from the Texas Panhandle to southwestern Kansas Friday afternoon through Friday night. 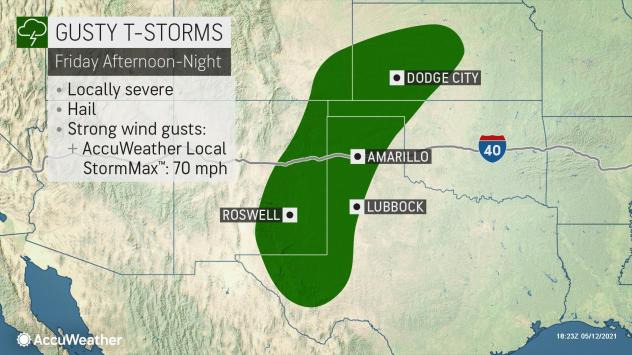 These storms will be capable of producing hail and strong wind gusts that could potentially reach an AccuWeather Local StormMax™ of 70 mph.

Cities like Dodge City, Kansas; Amarillo, Texas; and Roswell, New Mexico, should be on alert for any rapidly developing severe thunderstorms. Motorists along Interstate 40 should also remain vigilant, especially where heavy downpours can result in rapidly reduced visibility.

“Storms will continue to move across the Midwest into the weekend as warm and increasingly humid air advances northward through the southern Plains and clashes with cooler air farther north,” Anderson said. 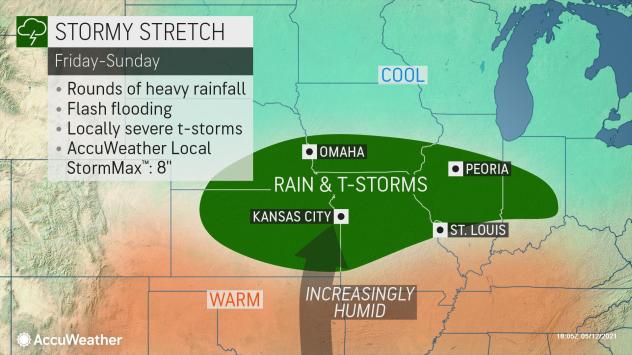 Cities like Kansas City; Omaha; St. Louis; and Peoria, Illinois, will be at risk for rounds of heavy rainfall and locally severe storms.

There is the potential for flash flooding, especially where heavy downpours repeatedly move over the same areas. An AccuWeather Local StormMax™ of 8 inches of rainfall is possible in these areas.

Motorists traveling through this region should remain on alert for sudden downpours, which can lower visibility to less than a few hundred feet at times. Ponding can also occur in any low-lying or poor drainage areas.

“Some locations may end up with up to 8 inches of rainfall over a three-day period and the strongest storms may produce locally damaging wind gusts, especially over the southern half of Kansas and Missouri,” Anderson said.

Along with the flooding threat and surge in humidity levels across the Midwest and southern Plains this weekend, a potent storm will approach the region from the west.

A dip in the jet stream pattern, along with warm and increasingly humid conditions ahead of a potent storm tracking out of the Rockies, will bring the threat for severe to the southern Plains early next week. 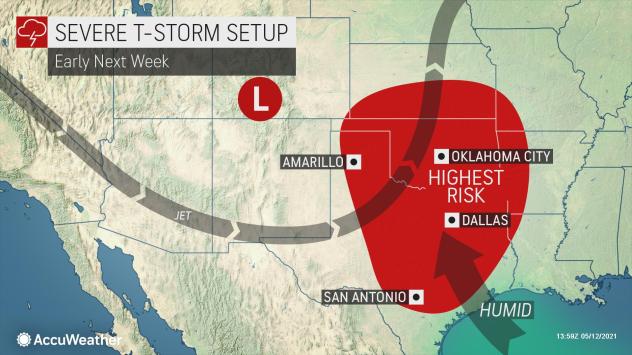 The exact location of severe weather has not been solidified yet, but meteorologists caution that severe thunderstorms can often carry a number of risks including hail, torrential rainfall, damaging wind gusts and even isolated tornadoes.

As the severe threat gets underway in the Plains early next week, storms are expected to return to Louisiana and portions of the Southeast.