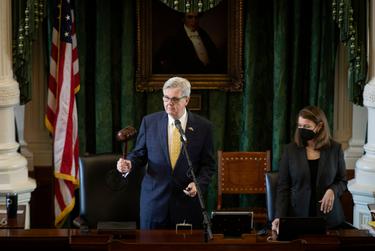 Lt. Gov. Dan Patrick gavels in the Senate chamber at the Capitol on the second day of the 2021 legislative session on Jan. 13, 2021. Credit: Miguel Gutierrez Jr./The Texas Tribune

Lt. Gov. Dan Patrick on Tuesday unveiled his top 31 priorities for the 2021 legislative session, a mix of newly urgent issues after last week’s winter storm, familiar topics stemming from the coronavirus pandemic and a fresh injection of conservative red meat into a session that has been relatively bland so far.

Patrick said in a statement that he is “confident these priorities address issues that are critical to Texans at this time” and that some of them changed in recent days due to the storm, which left millions of Texans without power. After his top priority — the must-pass budget — Patrick listed his priorities as reforming the state’s electrical grid operator, as well as “power grid stability.”

Patrick’s specific plans for such items remain unclear, however. Almost all of his priority bills have not been filed yet, and the list he released refers to the issues in general terms.

Patrick’s priorities echo much of the agenda that Gov. Greg Abbott laid out in his State of the State speech earlier this month, including his emergency items like expanding broadband access and punishing local governments that “defund the police.” Fourth on the list is a cause that Patrick himself prioritized recently — a “Star Spangled Banner Protection Act” that would require the national anthem to be played at all events that get public funding.

However, besides the fresh focus on the electrical grid, perhaps the most notable takeaway from Patrick’s agenda is how far it goes in pushing several hot-button social conservative issues. Patrick’s eighth and ninth priorities have to do with abortion — a “heartbeat bill” that would ban abortion once a fetal heartbeat is detected, as well as an “abortion ban trigger” that would automatically ban the practice if the U.S. Supreme Court overturned Roe v. Wade.

Abbott said he wanted to further restriction abortion in his State of the State speech but did not mention those two proposals specifically.

At 29th on his list, Patrick put “Fair Sports for Women & Girls,” an apparent reference to proposals that would ban transgender girls and women who attend public schools from playing on single-sex sports teams designated for girls and women.

Coming in at 10th is another proposal that was left unmentioned in Abbott’s speech despite popularity with the GOP base: banning taxpayer-funded lobbying. That is considered one of the big pieces of leftover business for conservatives after the 2019 session.