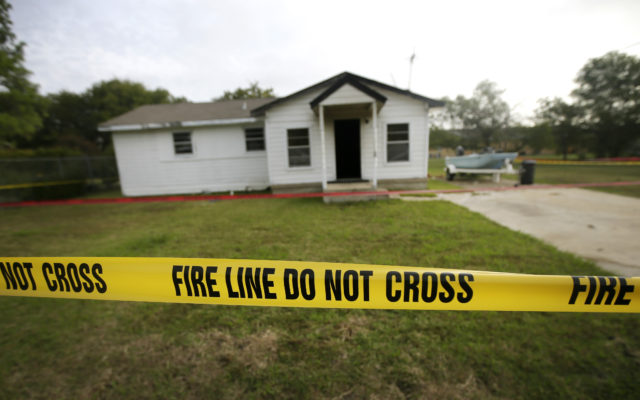 The home of Mary Brownlow is surrounded by fire and crime scene tape, Tuesday, Oct. 29, 2013, in Terrell, Texas. Brownlow, the resident at the location, was found dead Monday evening in the house where a fire was set and very clearly an arson, according to authorities. Police arrested 36-year-old Charles Everett Brownlow Jr., Mary Brownlow's son, early Tuesday. He is suspected of killing five people during a series of attacks hours earlier in his rural North Texas community. (AP Photo/Tony Gutierrez)

HOUSTON (AP) — Texas’ highest criminal court on Wednesday overturned the death sentence of a man who was convicted of capital murder after having been accused of shooting five people, including his mother and aunt.

The Texas Court of Criminal Appeals did not reverse Charles Brownlow’s conviction in the murder of Luis Gerardo Leal-Carrillo, a convenience store clerk. But in its opinion, the court says the trial jury in North Texas’ Kaufman County wasn’t properly told how to determine whether Brownlow had an intellectual disability.

Brownlow was arrested in October 2013 after a series of killings in Terrell, about 25 miles (40 kilometers) east of Dallas. He was accused of having killed his mother, Mary Brownlow, and setting her body on fire in her home, then shooting other people in the area, including his aunt. He was ultimately tried and convicted for the death of Leal-Carrillo.

Experts during Brownlow’s sentencing testified that he had tested as intellectually disabled when he was 5 years old and that he had been diagnosed with several psychological disorders.

The appeals court says the judge and prosecutors applied the state standard correctly at the time of his sentencing in May 2016, but the U.S. Supreme Court issued a 2017 opinion that rejected that standard, requiring a new sentencing hearing now.

Mark Moffitt, a prosecutor with the Kaufman County District Attorney’s office, declined to comment Wednesday on whether prosecutors would seek a new hearing since the case is pending.

A conviction of capital murder in Texas carries either a death sentence or mandatory life in prison without parole.