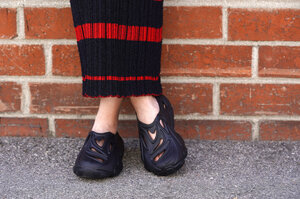 A little streetwear label has partnered with a giant in the adult toy industry to create a shoe derived in part from unused, defective amusements that come off the manufacturing line as misfits.

Looking a lot like Merrell’s popular Hydro Moc or Yeezy’s Foam Runners, Plastic Soul is about 15% sex toy. The rest is non-bleach EVA, a petroleum-based foam that’s difficult to recycle.

The shoe is the brainchild of David Teitelbaum, founder of Rose in Good Faith, and Chad Braverman, chief operating officer for Doc Johnson, the adult toy company his father founded in 1976.

More than two years in the making, Plastic Soul has yet to create the buzz of a Yeezy or the kicks of other titans in sneaker culture. And it doesn’t particularly live up to its own marketing hype as a major sustainable option, but the two Los Angeles businessmen are proud nonetheless.

“Personally, I love shoes. So it was a cool product, a really interesting way to get Doc Johnson on board with something that I would never ever do,” Braverman said from the company’s headquarters in the North Hollywood neighborhood of Los Angeles.

Teitelbaum is a collaboration king with elevated Ed Hardy, Lil Peep and Juice Wrld hoodies, T-shirts and other merch under his belt. Before the pandemic, he was looking for something new. He met with an adult film company, which put him on to Doc Johnson.

Braverman isn’t sending a lot of sex toys to landfills and is able to reuse some of the base material from his manufacturing rejects, but he was happy to figure out what to do with the rest. He said he took on the shoe collaboration not as a garden variety publicity stunt but to promote sex positivity through fashion and innovation. That’s fine with Teitelbaum.

“Something like 28% of the sales are going to women,” Teitelbaum said. “We’re hitting an interesting narrative. I think there’s a deeper connection.”

The shoes were introduced in white last month and weren’t a sold-out-in-seconds phenom online or in several retail stores around the world. Next up is a black colorway.

Braverman and Teitelbaum are grinding down the sex toy defects into millimeter-sized cubes of thermoplastic elastomer, a mix of rubber and plastic that lends itself to injection molding. That’s how the $130 slip-on shoes are made. Teitelbaum, who designed the shoe, added a natural cork insole for extra support.

Teitelbaum plastered LA with cheeky advertisements to start. To promote exclusivity, the two are making limited batches, but a rollout of more colors is planned. A month after introduction, the first iteration of 1,600 pairs had yet to sell out.

The online feedback has been mixed, Teitelbaum said.