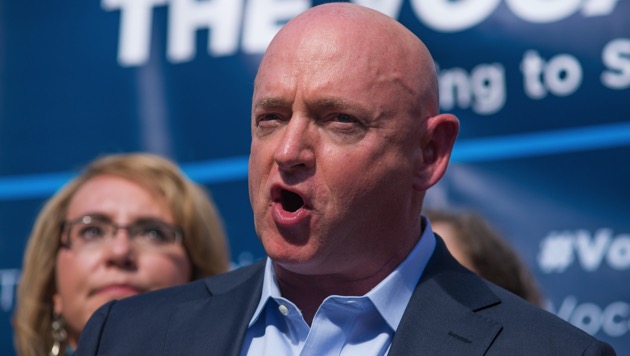 (NEW YORK) — With all eyes on Arizona’s special Senate election as the Republican-controlled Senate and White House make a dash toward filling the vacancy on the Supreme Court, Mark Kelly, the Democratic candidate in the election, said Wednesday that the winner of the election should be seated as soon as possible, in accordance with state law.

“Regardless of who wins, once the vote is certified here in Arizona, in accordance with the law, that person should be promptly seated to work for Arizonans,” Kelly told ABC’s The View co-hosts. “They’re concerned about health care, pre-existing conditions. They’re concerned about protecting Social Security and Medicare. So in accordance with the law, when the election is done, I think it’s important that if I was to win that I get sworn.”

This special election will determine who serves the remainder of the late Sen. John McCain’s term through 2022, and Democrats are eyeing Arizona as one of their best opportunities to pick up seats in Congress’s upper chamber. If they hold onto all of their seats — and they face a tough fight to keep their seat in Alabama — Democrats would need to win four Senate seats to take the majority. If Biden won the presidential election, they would only need to win three additional seats, because Sen. Kamala Harris would become a tie-breaking vote as vice president.

This special election is in a class of its own this election cycle. After Justice Ruth Bader Ginsburg’s passing Friday night, lawyers with expertise in Arizona election law told ABC News that a state statute would allow Kelly, should he win, to take certified election results to the Senate and attempt to assume Republican Sen. Martha McSally’s seat early, potentially giving him a vote on the new justice.

“The way I read the statute, and I think it is the correct way is that once we hold the general election, and the outcome of the general election is certified, at that point in time, Mark Kelly will assume the office, rather than the traditional time. There’s nothing in the statute that says that he has to wait until all the other new senators are sworn in,” Democratic lawyer Andrew Gordon told ABC Friday night.

However, Gordon also said the “statute is silent” on whether Kelly would have to be sworn in early and said that issue could end up being litigated in court.

A top Republican election lawyer in the state, who wanted to remain anonymous, asserted that it would be up to the secretary of the Senate to formally fill that seat, and kept open the possibility that legal challenges could delay the certification, which is supposed to happen by Nov. 30 under state law.

“After that, Mark Kelly, if he were to beat [McSally], he would be entitled to salary, and to go to Washington D.C. to present his certification and ask to be seated,” he said. “And then the Senate has to accept the certification and basically agree that he’s the final winner.”

Challenges to the results that could delay certification, like a recount or recanvass, must be made quickly in order to avoid delaying certification, another expert told ABC News.

“Those are on very limited grounds and those have to be filed fairly promptly after the election. So, very tight timeframes for those,” said Mary O’Grady, a Democratic election law expert in Arizona. “But there is the possibility of post-election challenges. Once a winner is declared, unless enjoined by the court, that election certification is issued.”

An ABC News/Washington Post poll out Wednesday morning showed Kelly and McSally in a tight race among likely voters in The Grand Canyon State, with 49% supporting Kelly and 48% supporting McSally.

ABC News currently rates the race as “lean Democratic,” but a lot can happen in six weeks to change the dynamic of the race, including how this Supreme Court vacancy plays out. President Donald Trump has said that he wants a vote before the election, but Senate Majority Leader Mitch McConnell has so far only committed to a vote before the end of the year. The president plans to nominate a woman on Saturday.

On The View, Kelly was asked about some demands Democrats are pushing for should the Senate move forward with confirmed Trump’s nominee, including adding justices to the Court and getting rid of the legislative filibuster, a Senate procedure that in effect, makes it so legislation must have at least 60 votes to pass.

McConnell took the “nuclear option” in 2017, getting rid of the 60-vote threshold for Supreme Court nominees to allow Supreme Court Justice Neil Gorsuch — and all subsequent SCOTUS nominees — to be confirmed with only a simple majority. When Democrats controlled the Senate in 2013, Majority Leader Harry Reid, did the same thing for most executive and judicial nominees’ confirmations, as former President Barack Obama’s nominees were being filibustered. McConnell called that “a sad day in the history of the Senate.”

Kelly said neither removing the filibuster nor expanding the court should be in the current conversation.

“This shouldn’t really — shouldn’t be part of the discussion… It’s also very hypothetical. And it’s kind of more of the same stuff from a broken Washington. I think what they should be focused on is, how about a COVID relief bill?” Kelly said. “These threats are not, you know, what Washington should be focused on at this time. Republicans and Democrats should be really focused on trying to solve this crisis.”

Kelly, a former U.S. Navy captain and NASA astronaut, pitched himself as an independent-minded candidate, who would work across the aisle in the Senate, and even with a Trump-controlled White House, to get things done for Arizonans. He noted fixing America’s infrastructure and working to lower the price of prescription drugs were issues he could see himself working with the current president on, but also that he wouldn’t look at party affiliation to determine whether he should work with other legislators in Washington.

He also bucked some in the Democratic party on the issue of “defunding the police,” saying that he doesn’t believe that’s the way to address the racial unrest in the country, largely spurred by police officers killing Black Americans at a higher rate than white Americans.

“I think we can all agree that there’s racial discrimination in our country that has resulted in too many Black men being killed by the police,” Kelly, the son of two cops, said. “So, where I don’t think defunding the police is the answer, police officers have a very difficult job to do — I saw that with my own parents — so they need to have the resources to do that job, but reforms are needed.”

In the 2018 Senate race, Kelly’s challenger, then-Congresswoman McSally, lost to Democrat Kyrsten Sinema by a margin of 2.4 percentage points — the first real sign of Arizona turning into a purple state instead of solidly red, as attitudes and demographics change in the state, especially in Maricopa County, home to Phoenix and Scottsdale and more than half of the Arizona’s population. Arizona Gov. Doug Ducey later appointed McSally to fill the late Republican Sen. John McCain’s seat after former Sen. Jon Kyl resigned at the end of 2018.

“I think Arizonans really like independent leadership, folks that are willing to work across the aisle to get things done for Arizona in the American people,” Kelly said, adding that both Sen. McCain and former Sen. Barry Goldwater did that. “They’re really worried about their health care, worried about social security. They’re worried about Medicare becoming a voucher program… We’ve got climate issues here, border security issues and often Washington has been failing the state of Arizona on these issues, so I think they’re just looking for change and independent leadership.”