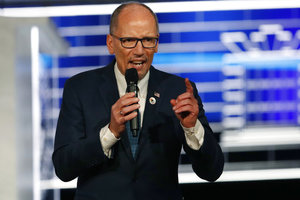 FILE - In This Nov. 20, 2019, file photo, Chair of the Democratic National Committee, Tom Perez, speaks before a Democratic presidential primary debate, in Atlanta. The Nevada caucuses pose a new test for Democratic National Committee Chairman Tom Perez, as the Democratic party leader tries to keep a messy primary season from devolving into chaos.  Perez predicts a smoother process Saturday than the Feb. 3 debacle in the Iowa caucuses, where results have yet to be certified. But Perez warns that the Nevada caucuses are just the next step in what could be a long, bruising primary season.  (AP Photo/John Bazemore, File)

Democratic National Committee Chair Tom Perez said Monday that the handful of 2020 presidential caucuses should be the last the party ever holds.

He didn’t specifically name Iowa, which for decades has led off the nominating calendar, but his position would represent a seismic shift in the party’s traditions.

Perez’s term as chair will end before the 2024 nominating calendar is determined. But he told The Associated Press on the opening day of the Democratic National Convention that he plans to “use the bully pulpit as a former chair to make sure we continue the progress” of changes after the bitter 2016 primary fight between nominee Hillary Clinton and runner-up Bernie Sanders.

Among the changes was to push states toward primaries and at least require the remaining caucus states like Iowa to create a paper ballot system. The Iowa caucuses were chaotic this year, with state and national party officials spending days trying to determine the winner.

Iowa’s first-in-the-nation caucuses, as well as New Hampshire’s status as the first primary state a week later, are further threatened in the Democratic pecking order because the states are overwhelmingly white, while the national party is much more diverse.

That gap was underscored this year when eventual nominee Joe Biden finished fourth in Iowa and fifth in New Hampshire, only to dominate the nominating fight over the ensuing months once more diverse states voted.

Perez wouldn’t comment on whether he thinks Iowa or New Hampshire should give up or share their leadoff spots. But he said the demographics “will undoubtedly come up” in future party discussions.