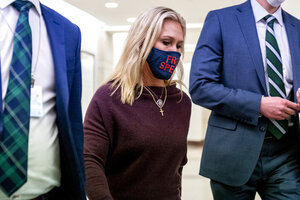 Schneider said in a statement Tuesday he decided not to introduce his measure after Greene said she visited the U.S. Holocaust Memorial Museum in Washington, D.C., and apologized for the remarks.

“I believe that words matter and that they have consequences,” the Illinois Democrat said in a statement. “Elected officials, and especially members of Congress, have a great responsibility to carefully measure our words and be as precise as possible when we communicate. Sometimes we may stumble in our message. When we do, we should be given the chance to clarify exactly what we intended to say and promptly set the record straight.”

Schneider indicated as recently as Monday he was prepared to introduce his censure resolution against Greene, tweeting then that when the Georgia congresswoman “repeatedly compared the US COVID-response and the Holocaust, she dishonored the millions of lives lost in WWII and the Shoah. She has forgotten America’s fight against the Nazi menace.”

Greene drew widespread outrage for several comments last month comparing public health requirements to protect against COVID-19 to the Holocaust, in which 6 million Jews were killed. In one tweet about vaccinated employees at a Tennessee grocery store displaying a vaccination logo on their name badges, Greene said it was “just like the Nazi’s forced Jewish people to wear a gold star.” Then, in an interview with Christian Broadcasting Network, she compared the safety measures from House Democrats to “a time and history where people were told to wear a gold star.”

“They were definitely treated like second class citizens, so much so that they were put in trains and taken to gas chambers in Nazi Germany,” Greene said. “And this is exactly the type of abuse that Nancy Pelosi is talking about.”

Republicans and Democrats alike rebuked the comments from Greene, who was stripped of her committee assignments in February after social media posts were uncovered suggesting support for violence against Democratic leaders.

Schneider said he “never expected a retraction or an apology” from Greene given her “long history of unapologetically inflammatory and dangerous rhetoric.”

But on Monday, she apologized and expressed regret for her comments.

“I’m truly sorry for offending people with remarks about the Holocaust,” Greene said, adding that “anti-Semitism is true hate.”

The Georgia Republican said that while she visited the site of the Auschwitz concentration camp when she was 19, she visited the Holocaust Museum on Monday “because I thought it was important.”

Schneider said that in light of Greene’s comments, he decided against introducing the censure resolution.

“Moving forward, I will continue to call out harmful or dangerous rhetoric by my colleagues, irrespective of which side of the aisle from which it emanates,” he continued. “While I will certainly have vehement disagreements with Rep. Greene on policy, politics, and style, I hope that Congress can take the necessary steps to serve as a model to a nation desperately in need of leaders willing to correct themselves when they are wrong, and to engage in a more civil discourse to ultimately work together toward a ‘more perfect union.'”