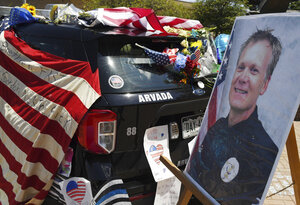 DENVER (AP) – A suburban Denver police officer fatally shot last week by a man investigators say was intent on killing as many officers as possible was remembered as someone with “fundamental goodness” who knew how to love others.

Speaking at a memorial service yesterday, Arvada Police Chief Link Strate said he felt Officer Gordon Beesley, 51, hated writing traffic tickets as a motorcycle officer – but found his true calling when he was assigned to work with students as a school resource officer.

For example, Strate said Beesley used to go to work early twice a week to bike to school with a student with a developmental delay whose mother didn’t want him riding alone.

No one discussed the ambush of Beesley on June 21. He was killed while responding to a report of a suspicious person in Arvada’s downtown, about 7 miles northwest Denver.

Police say Ronald Troyke chased Beesley and shot him when he turned around. Johnny Hurley, who was shopping nearby, killed Troyke with his handgun. Hurley, in turn, was shot to death by a responding officer who saw him holding Troyke’s AR-15.

An investigation into that shooting is underway.