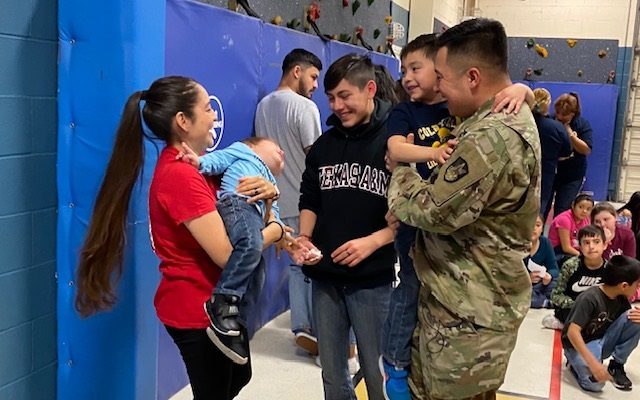 He surprised his three sons during a pep rally Friday morning at Colby Glass Elementary School in the Northside Independent School District.

Thirteen-year-old Diego Acosta thought his mom, Karina, pulled him out of first period at Pat Neff Middle School to attend a special awards ceremony at his little brother’s school.

“Seeing him here, seeing everyone reunited and everyone back together again, it was a lot,” said Diego. “It just hit me and I started crying.”

Captain Acosta arrived in San Antonio Thursday and it was difficult to hide from his sons who were staying with his parents-in-law next door.

“This morning, I was able to hear them getting into the car and I just wanted to go over there to hug them and kiss them,” he said.

A few hours later, he was doing just that in front of hundreds of students at Glass Elementary who cheered as 5-year-old Abraham Acosta went up to hug his dad. The captain’s wife and 18-month-old son also were there for the big surprise. Acosta was planning to take the family out for pizza.

Captain Acosta will be here for three weeks before heading back to Turkey.