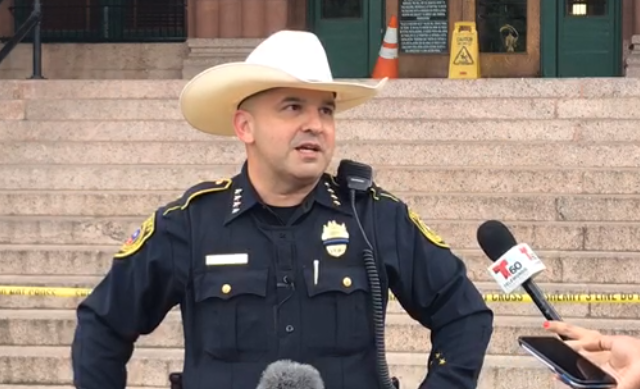 SAN ANTONIO (KTSA News) -Two suspects accused of leading Bexar County deputies on a chase following a crime spree Monday morning have been arrested in a muddy ditch in the Northeast Side.

Sheriff Javier Salazar says it all started with an attempted robbery on Lakebend Drive. The suspects then abandoned their vehicle and tried to carjack an elderly man. When that failed, one of the men stole a car from a bay at an oil change shop on FM 78.

It wasn’t hard to spot the car covered with oil because employees working on the vehicle didn’t get a chance to replace the oil drain plug. Deputies started chasing the suspects again until the men crashed into a patrol car on Walzem Road at IH 35.

The suspects got out and ran into a ditch about 20 feet deep behind Las Palapas Restaurant where one of the suspects got into a scuffle with a deputy and tried to take his gun.

“There was a prolonged struggle,” Salazar said. “Thankfully, the deputy did not lose his weapon in that fight.”

Another deputy subdued the suspect, and both men were taken into custody on a slew of charges, including assaulting a peace officer and evading arrest.

The deputies suffered bumps and bruises and their uniforms were torn and muddied, but Salazar says they escaped serious injuries.