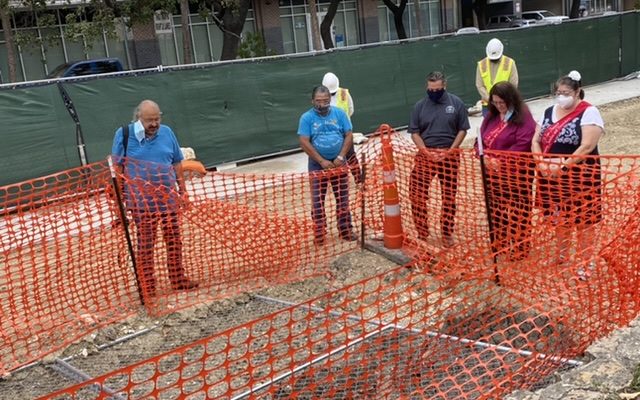 SAN ANTONIO (KTSA News) – Descendants of some of San Antonio’s  founding families gathered at a construction site near Milam Park to honor and pray before the exhumation of  human remains that were found during an archaeological investigation.

Lisa Santosa, president of the 1718 San Antonio Founding Families and Descendants, read the names of  ancestors who settled the city.  Gilbert Perusquia said a prayer as they all bowed their heads over the site where bone fragments and artifacts were found in May.

“What we have here are several bones.  One is identifiable as a vertebra that is in a burial pit,” said City Archaeologist Shawn Marceaux.

They don’t know the biological sex or age of the person, but that will be investigated following the removal.

They also found a few artifacts at the scene on Santa Rosa Street.

“Metal tacks associated with coffins that would be used to put the coffin together, some wood fragments presumably from the coffin, and small nails,” said Marceaux.

Anthony Delgado with the Canary Islands Descendants Association is grateful that the city is conducting archaeological investigations before construction on the downtown streets around Milam Park.   He’s disappointed that the historic cemeteries were not taken into account during some of the previous construction, but is thankful to be included in these projects.

“We can’t undo the past, but we can work together to make sure that what we’re doing today makes sense and maybe, lay the foundation for future work,” said Delgado. “The protocols that the city followed–we had a say in what those procedures were gonna be.”

The remains will be stored at UTSA’s Center for Archaeological Research until they are re-interred  following completion of the construction projects around Milam Park, which are expected to conclude in 2023.