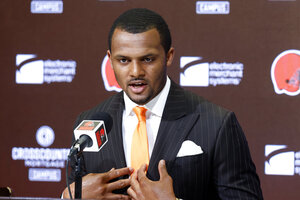 CLEVELAND (AP) — Deshaun Watson reported for his first offseason program with the Cleveland Browns, who mortgaged their future in acquiring the controversial quarterback in a trade.

With snow falling, Watson arrived at the team’s facility in Berea, Ohio, on Tuesday for the voluntary program. The Browns posted a photo on Twitter of Watson, wearing a heavy winter jacket, before he entered the building.

One of the reasons Watson initially rebuffed the Browns was because of the cold weather.

Desperate to find an elite QB, Cleveland traded three first-round draft picks and three others in March to Houston for Watson, who faces 22 civil lawsuits from women accusing him of sexual misconduct during massage therapy sessions.

Watson also faces discipline from the NFL, which is investigating whether he violated the league’s personal-conduct policy.

The three-time Pro Bowl QB has professed his innocence. Two grand juries in Texas have declined to indict him on any criminal charges. However, Watson is still dealing with the civil lawsuits and has been giving depositions in recent weeks.

The Browns did their own background check on Watson, and owners Dee and Jimmy Haslam felt so confident in the research — and after personally meeting with Watson — that they signed him to a fully guaranteed $230 million contract after he waived his no-trade clause to come to Cleveland.

The move for Watson effectively ended quarterback Baker Mayfield’s four-run year run with the Browns, who are looking to trade the former No. 1 overall pick but are finding a limited market, partly due to his $18.8 million contract for next season.

Mayfield is not expected to be at the team’s offseason program. He’s rehabbing his surgically repaired left shoulder.