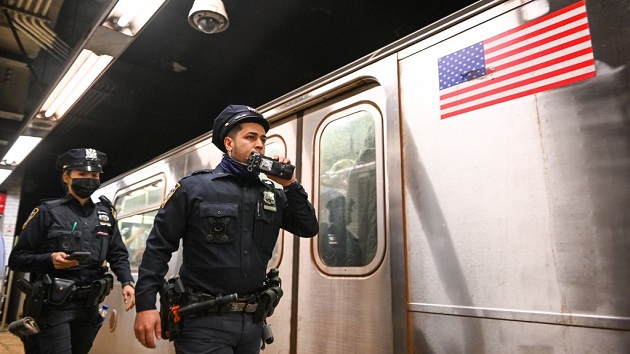 NEW YORK, NEW YORK - APRIL 12: New York City police investigate an incident on an Uptown 4 subway after an emergency brake was pulled near Union Square on April 12, 2022 in New York City. Security has been heightened after a gunman in a gas mask and construction vest set off a smoke grenade and opened fire on a subway today at the 36th Street and Fourth Avenue station in the Sunset Park neighborhood of Brooklyn. At least 29 people were injured - 10 of them by gunshot - amid a fusillade of 33 rounds, according to reports. Authorities have named 62-year-old Philadelphia man Frank R. James as a person of interest. (Photo by Alexi J. Rosenfeld/Getty Images)

(NEW YORK) — Daniel Enriquez, 48, was shot and killed in an unprovoked attack on a Q train Sunday in New York City as it headed into Manhattan. The tragedy comes just a few weeks after a gunman opened fire on an N train subway car during rush hour, shooting and injuring 10 people.

The recent spate of crimes on the city’s public transportation has left the city scrambling for answers as ridership continues to climb back toward pre-pandemic levels and more people return to riding with the Metropolitan Transportation Authority.

Transit crime is up 58% from this time last year, though April showed a dip in crimes on public transportation, according to New York Police Department data.

When compared with 2020, crime is up only about 1%. However, the amount of transit crime in New York City has remained steady since 2006, with the exception of 2021’s crime dip.

“[Enriquez’s death] just renewed our calls to deal with the proliferation of guns on our street, even after the bullet takes the life of an innocent person, the emotional trauma continues to rip apart the anatomy of our city,” Mayor Eric Adams said in a press conference on Monday.

Adams vowed to address public safety needs following the death of subway rider Michelle Go in January. She was killed after being pushed in front of an oncoming train.

At a press conference following Go’s death, Adams said the attack highlights the importance of those in crisis receiving mental health services to ensure that the city’s streets “above ground and below ground” are safe.

He announced in January that he would deploy more police officers into the subway systems alongside mental health workers, and enforce MTA rules, such as fare enforcement, more strictly.

“[We’ll] just really double down on our concerns that our system must be safe, must be safe from actual crime, which we are going to do and it must be safe from those who feel as though there’s a total level of disorder in our subway system,” Adams said at a Jan. 18 press conference.

At least 1,000 officers were added to the subway’s police force in an attempt to combat crime shortly after the announcement, according to local newspaper AMNY.

Adams has since also placed emphasis on mental health and community building as tools for crime prevention. He also said he hopes to target the prevalence of gun violence and ghost guns as a key issue in the city’s fight against violence.

“By the time someone carries a gun, discharges a gun, we already failed as a city,” Adams said at a May 20 conference, advocating for more community-based services. “Everyone must be on board because we have to prevent as well as apprehend those crimes that are taking place in the city.”

MTA CEO Janno Lieber called Sunday’s fatal shooting “an incredible setback” for the effort to get the city back to normal after the pandemic curtailed ridership.

Still, MTA’s ridership has been seemingly left unaffected by reports of crime, as ridership levels continue to set pandemic-era records, marking the highest totals since March 2020.

“This week, New York reached a milestone in transit ridership, one of the most encouraging indicators that our comeback from COVID is right on track,” New York Gov. Kathy Hochul said in a recent statement on the records. “Public transportation systems are the lifeblood of New York, and we will continue doing everything in our power to bring riders back, helping drive our economic recovery.”