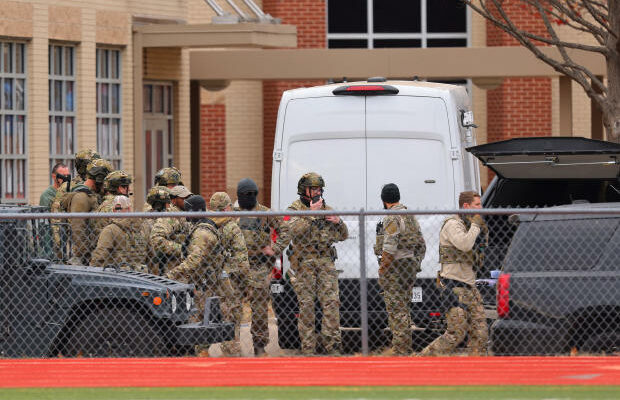 A law enforcement source told CBS News that Akram, a British citizen, flew to New York’s John F. Kennedy Airport a few days before New Year’s and spent several days in the area in a cheap hotel. He went to Texas soon after and stayed at both a hotel and a homeless shelter, the source said.

Federal law enforcement officials are continuing to investigate how Akram traveled from New York to Texas.

The law enforcement source said Akram obtained the handgun he used in the standoff “on the street,” but did not specify how or where. The gun was loaded, the source said.

British police said late Sunday that two teenagers had been detained in South Manchester in connection with the incident. The law enforcement source told CBS News that the two people are Akram’s teenage sons, who were allegedly in contact with him the day of the incident. Investigators are looking to determine what the sons may know about their father’s alleged actions, the source said.

Rabbi Charlie Cytron-Walker, who was one of the people taken hostage, told “CBS Mornings” that when the gunman first entered the synagogue, he thought he might need shelter and made him a cup of tea. But during a prayer service, which was being live-streamed, the gunman revealed his intentions.

“It was terrifying,” Cytron-Walker said. “It was overwhelming and we’re still processing. It’s been a lot.”

The FBI said Sunday that during the hostage situation, the gunman “spoke repeatedly about a convicted terrorist who is serving an 86-year prison sentence in the United States on terrorism charges.”

A source close to the incident had previously told CBS News that the hostage-taker had asked for the release of Aafia Siddiqui, a Pakistani woman serving an 86-year sentence in a federal prison in Texas for trying to kill U.S. officers in Afghanistan.

The law enforcement source said investigators had been in contact with Siddiqui to determine if there was any connection between her and Akram.

One hostage was released at approximately 5 p.m. local time. Cytron-Walker and the other two remaining hostages were able to escape hours later. Cytron-Walker said the situation seemed to be deteriorating, and he knew from attending security training sessions that “when your life is threatened, you need to do whatever you can to get to safety.”

“I told them to go, I threw a chair at the gunman and I headed for the door,” he said. “And all three of us were able to get out without even a shot being fired.”