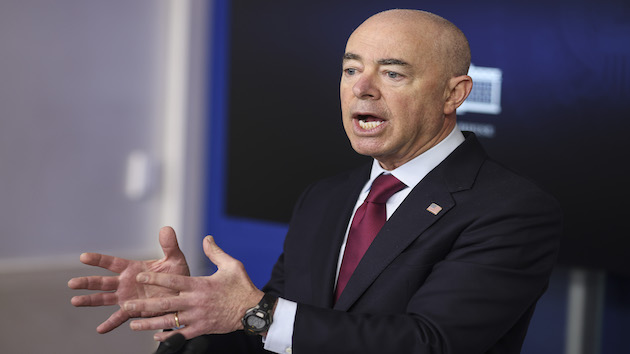 Alejandro Mayorkas, secretary of the U.S. Department of Homeland Security (DHS), speaks during a news conference in the James S. Brady Press Briefing Room at the White House in Washington, D.C., U.S., on Monday, March 1, 2021. Mayorkas accused the Trump administration of gutting the U.S. immigration system, complicating his job as he tries to meet demands from Democrats to roll back his predecessors’ policies. Photographer: Oliver Contreras/Sipa/Bloomberg

(WASHINGTON) — Homeland Security Secretary Alejandro Mayorkas on Monday defended the Biden administration’s handling of unaccompanied migrant children at the border against growing criticism, saying he hopes to give families separated under President Donald Trump the option to reunite in the U.S. while blaming the prior administration for having “gutted” the immigration system.

Trump’s immigration approach largely focused on hardline enforcement and security measures including the appropriation of billions of dollars for a border wall, which Biden stopped.

“What we are seeing now at the border is the immediate result of the dismantlement of the system and the time that it takes to rebuild it virtually from scratch,” Mayorkas said. “We have, though, already begun.”

The Trump administration also took on a policy called “zero-tolerance” which resulted in the separation of thousands of migrant parents from their children. Hundreds remain separated to date and — among his first actions on immigration — Biden created a task force chaired by Mayorkas to reunite the separated families.

“We will explore lawful pathways for them to remain in the United States, and to address the family needs so we are acting as restoratively as possible,” Mayorkas said.

Despite what he called these “challenges,” he insisted the U.S. was not in the midst of a “crisis” at the southern border.

The number of arrests made each month at the border has been increasing since April 2020, which has posed a central challenge for the Biden administration as it works to roll back many of the Trump-era enforcement measures.

“We need individuals to wait,” Mayorkas said. “And I will say that they will wait with a goal in mind. And that is our ability to rebuild as quickly as possible a system so that they don’t have to take the dangerous journey, and we can enable them to access humanitarian relief from their countries of origin.”

However, Biden has yet to revoke Trump-era protocols brought down after the pandemic began to turn away or “expel” the vast majority of migrants at the border. This use of this section of public health code known as “Title 42” has been condemned by human rights observers as immigrant advocates for the limits it places on access to legal avenues for obtaining asylum status.

Dozens of advocacy organizations wrote to the Biden administration earlier this month calling for a swift end to the use of “Title 42,” claiming the Centers for Disease Control and Prevention had been pressured by Trump’s immigration hawks into issuing the order.

“During the presidential campaign, you committed to end inhumane Trump administration border policies, uphold U.S. laws and treaty obligations to protect refugees and immigrant children, and adopt COVID-19 measures based in science,” the organizations wrote. “For your actions to reflect those promises, your administration must end the misuse of Title 42 public health authority at the border.”

Mayorkas rejected the comparison to the Trump administration’s policies, noting that, under Biden, authorities at the border are not “expelling” unaccompanied children.