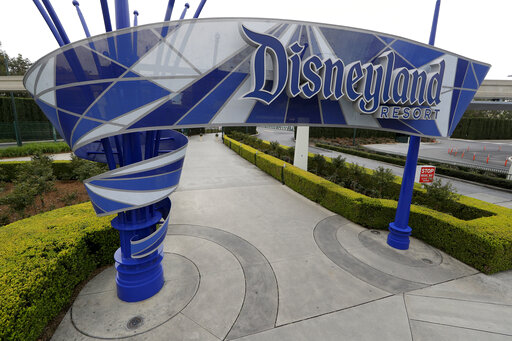 FILE - In this file photo taken Wednesday, March 18, 2020, one of the normally bustling entrances to the Disneyland resort is vacant due to the coronavirus closure in Anaheim, Calif. Disney is postponing the mid-July reopening of its Southern California theme parks until it receives guidelines from the state. The company announced Wednesday, June 23, 2020, an indefinite postponement for Disneyland and Disney California Adventure in Anaheim. (AP Photo/Chris Carlson,File)

ANAHEIM, Calif. (AP) – For Disney properties in California, it’s still a closed world, after all.

The entertainment company is putting on hold plans to reopen its West Coast theme parks and other attractions next month.

Disney planned to reopen Disneyland and Disney California Adventure on July 17, after a four-month shut down because of the coronavirus.

But Disney says it can’t do that until state officials provide guidelines on how to proceed.

And those rules won’t be available until after July 4.

Disney says that won’t provide enough time to get workers back to the park and trained before a July 17 reopening. No new reopening date for the California parks has been set.