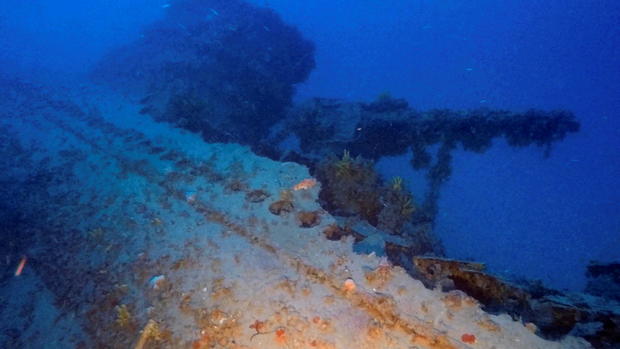 The wreckage of the Italian submarine Jantina that was sunk during World War II by the British submarine HMS Torbay, lays south of the island of Mykonos, in the Aegean Sea, Greece, November 3, 2021.  KOSTAS THOCTARIDES / REUTERS

The wreckage of an Italian submarine that was sunk 80 years ago with four dozen sailors aboard during World War II has been found off the coast of Greece. In an interview with Reuters and in a separate Facebook post, renowned Greek diver Kostas Thoctarides confirmed that his team found the Jantina in November.

The ship sank on July 5, 1941, with 48 crewmembers aboard after being hit by torpedoes fired by the British sub HMS Torbay in the Aegean Sea, Thoctarides said. Only six sailors managed to swim to safety to the island of Dilo, he said.

Records from Italy’s Naval History Office confirmed the wreckage was the Jantina. Images posted by the diving team appear to show the submarine’s deck gun.

“The wreck and the surrounding area was treated with respect as a wet grave,” Thoctarides wrote on Facebook.

Thoctarides said his team of divers found the shipwreck south of the island of Mykonos at a depth of more than 300 feet. The submarine, which had sailed from the island of Leros when it was sunk, was located by the ROV Super Achilles, a remotely operated underwater vehicle that completed a detailed visual inspection of the wreckage.

“Naval history is like a puzzle, and this is part of that puzzle,” Thoctarides told Reuters. “The confrontation of two submarines is a rare naval event.”

The Jantina, which was built in 1932, was more than 61 meters long (about 200 feet), had a maximum sailing speed of 14 knots, and a maximum operational depth of 80 meters, Thoctarides said.

In 2019, the USS Grayback — a World War II U.S. Navy submarine missing for 75 years — was found off Okinawa, Japan. The same year, explorers also found the USS Grunion, a submarine that sank in 1942 on its inaugural mission during World War II off the coast of Alaska.