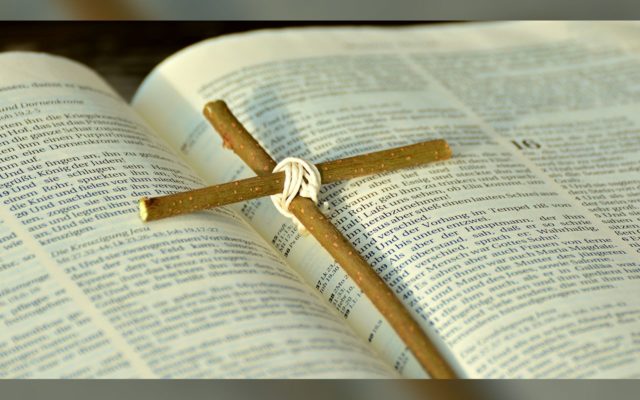 Jesus advising the disciples to buy a sword in Luke 22:36: “But now if you have a purse, take it, and also a bag; and if you don’t have a sword, sell your cloak and buy one.”

First, let’s look at a Gospel setting in which Christ absolutely endorses self-defense. “But know this, that if the master of the house had known what hour the thief would come, he would have watched and not allowed his house to be broken into (Luke 12:39). ” Isn’t Jesus saying here that violence – or certainly the threat of violence – is not just the reasonable, but even the responsible, option to take in protecting one’s property, never mind one’s person or one’s family?

Then, we have this next quotation from the Gospel of Mark: “But no one can enter the strong man’s house and plunder his goods unless he first binds the strong man (3:27).” Now, why would the bad guy have to bind the strong man? Obviously, because the strong man would otherwise do all he could to keep the bad guy out! And again, that’s just to protect property.

As if to confirm Mark’s Gospel, we find these additional words of Christ in the Gospel of Luke: “When the strong man, fully armed, guards his courtyard, his property is undisturbed (11:21).” In case anyone still doesn’t get the point, it is not enough simply to defend yourself when the situation arises; you should be armed and ready to defend even your property. And this, of course, is what Jesus told his disciples to do shortly before he was taken prisoner when he told them to make sure they had swords: arm yourselves and be ready.

The backdrop to this teaching is that the Jews considered it an insult to be hit in the face, much in the same way that we would interpret someone spitting in our face. Bible scholar R. C. Sproul comments: “What’s interesting in the expression is that Jesus specifically mentions the right side of the face [Matthew 5:39]….If I hit you on your right cheek, the most normal way would be if I did it with the back of my right hand….To the best of our knowledge of the Hebrew language, that expression is a Jewish idiom that describes an insult, similar to the way challenges to duels in the days of King Arthur were made by a backhand slap to the right cheek of your opponent.”

The principle taught in the Sermon on the Mount in Matthew 5:38-42 would thus seem to be that Christians should not retaliate when insulted or slandered (see also Romans 12:17-21). Such insults do not threaten a Christian’s personal safety. The question of rendering insult for insult, however, is a far cry from defending oneself against a mugger or a rapist.

In terms of following Christ’s example, one must remember that His personal nonresistance at the cross was intertwined with His unique calling. He did not evade His arrest because it was God’s will for Him to fulfill His prophetic role as the redemptive Lamb of God (Matthew 26:52-56). During His ministry, however, He refused to be arrested because God’s timing for His death had not yet come (John 8:59). Thus, Christ’s unique nonresistance during the Passion does not mandate against self-protection.

THE BIBLICAL CASE FOR SELF-DEFENSE. It is noteworthy that the Bible records many accounts of fighting and warfare. The providence of God in war is exemplified by His name YHWH Sabaoth (“The LORD of hosts”–Exodus 12:41). God is portrayed as the omnipotent Warrior-Leader of the Israelites. God, the LORD of hosts, raised up warriors among the Israelites called the shophetim (savior-deliverers). Samson, Deborah, Gideon, and others were anointed by the Spirit of God to conduct war. The New Testament commends Old Testament warriors for their military acts of faith (Hebrews 11:30-40). Moreover, it is significant that although given the opportunity to do so, none of the New Testament saints–nor even Jesus–are ever seen informing a military convert that he needed to resign from his line of work (Matthew 8:5-13; Luke 3:14).

Prior to His crucifixion, Jesus revealed to His disciples the future hostility they would face and encouraged them to sell their outer garments in order to buy a sword (Luke 22:36-38; cf. 2 Corinthians 11:26-27). Here the “sword” (Greek: maxairan) is a dagger or short sword that belonged to the Jewish traveler’s equipment as protection against robbers and wild animals. A plain reading of the passage indicates that Jesus approved of self-defense.

Self-defense may actually result in one of the greatest examples of human love. Christ, Himself said, “Greater love has no one than this, that he lay down his life for his friends” (John 15:14). When protecting one’s family or neighbor, a Christian is unselfishly risking his or her life for the sake of others.

Theologians J. P. Moreland and Norman Geisler say that “to permit murder when one could have prevented it is morally wrong. To allow a rape when one could have hindered it is evil. To watch an act of cruelty to children without trying to intervene is morally inexcusable. In brief, not resisting evil is an evil of omission, and an evil of omission can be just as evil as an evil of commission. Any man who refuses to protect his wife and children against a violent intruder fails them morally.”

Listen below for more.