Does photo show a rainbow on Mars? NASA answers the mystery 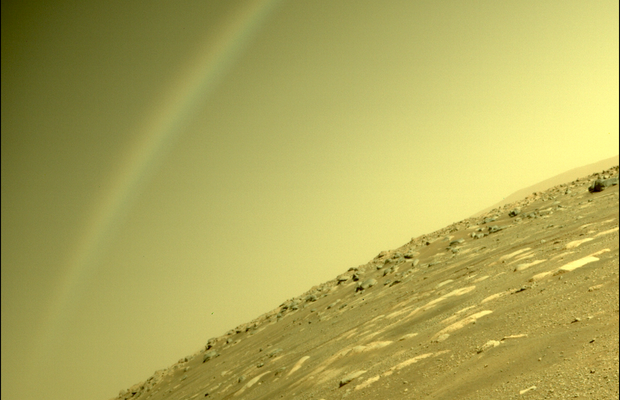 NASA's Mars Perseverance rover acquired this image of the area in back of it using its onboard Rear Left Hazard Avoidance Camera.This image was acquired on Apr. 4, 2021 (Sol 43) at the local mean solar time of 15:14:09.  NASA/JPL-Caltech

Over the weekend, the Perseverance rover captured what appeared to be a stunning rainbow shooting across the Martian horizon. Now, NASA is debunking that theory.

Rainbows, which require both sunlight and raindrops, are not possible in the cold, thin Marian atmosphere — so what explanation is there for the spectacular image?

After several days of online speculation by thousands of people, NASA decided to reveal the truth: The “rainbow” is actually just a lens flare, which occurs when light hits the camera lens at a specific angle.

“Many have asked: Is that a rainbow on Mars? No. Rainbows aren’t possible here,” the rover’s account tweeted Tuesday.  “Rainbows are created by light reflected off of round water droplets, but there isn’t enough water here to condense, and it’s too cold for liquid water in the atmosphere. This arc is a lens flare.”

“I have sunshades on my front Hazcams, which were considered mission-critical (I need them for driving forward & I’m usually driving forward),” Perseverance said in a follow-up tweet. “Sunshades weren’t considered essential on my back Hazcams, so you can see scattered light artifacts in their images.”

Perseverance has taken thousands of photos since its arrival on the red planet in February, including a recent close-up selfie, and shots of it lowering the Ingenuity helicopter from its belly onto the ground. The tiny helicopter is now preparing to make the first-ever flight on another planet, which could happen as soon as Sunday.