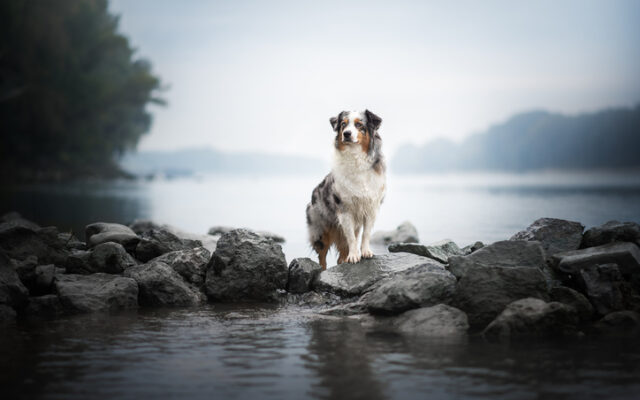 A one-year-old dog swept away in California floodwaters was rescued and returned to his owner thanks to firefighters – and technology.

Seamus, an Australian shepherd, was on a walk with his owner in San Bernardino and broke away Monday, the fire department said in a news release. His owner tried to catch him, but Seamus went into a storm drain and began to float away. California has experienced widespread flooding in some areas, caused by several storms that have been battering parts of the state for weeks.

His owners and firefighters began to search for him in the area. An employee at an RV facility stopped a fire crew, saying they heard a dog barking and then saw one floating down a channel.

The employee followed Seamus, who found a way out of the water and into a tube in the ground.

Firefighters found the tube – with Seamus inside, staring back at them among the dirt and litter. He was nearly a mile away from the storm drain he originally entered and “miraculously made it out of the fast-moving water,” the fire department said.

The dog was stuck at the bottom of the tube, but firefighters quickly got him up a ladder to safety. He seemed uninjured and in good spirits and they brought him back to the fire engine to dry and warm him up.

Seamus’ collar had both an Apple AirTag and an ID tag, which helped his rescuers and owners find each other.

“While we would have loved to make Seamus a fire station pup, glad we could reunite the dog back with his owners,” the fire department said.

A video posted on Facebook shows Seamus’ owner reuniting with him. He jumps into her arms from the fire truck – dirty and wet, but finally back home.