Donors to launch Houston newsroom with $20M in seed funding 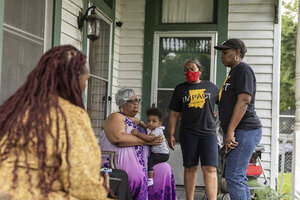 Sandra Edwards, right, interviews residents in Houston for the American Journalism Project about what they most needed and found to be missing in local news coverage, on Monday, June 7, 2021 in Houston. Five philanthropies plan to spend more than $20 million to bolster news coverage in Houston and create what they say will be one of the largest local nonprofit news organizations in the country. (Michael Starghill/The American Journalism Project via AP)

Five philanthropies plan to spend more than $20 million to bolster news coverage in Houston and create what they say will be one of the largest local nonprofit news organizations in the country.

The newsroom is anticipated to launch later this year or early 2023 on multiple platforms, the donors said Wednesday in a news release. The goal, they said, is to “elevate the voices of Houstonians” and address information needs identified through focus groups, community listening sessions and multi-language surveys conducted with local residents.

Ann Stern, president and CEO of the Houston Endowment, said her organization teamed up with Houston-based Kinder Foundation and Arnold Ventures about two years ago to commission the research from the American Journalism Project, which is giving $1.5 million in seed funding towards the project and supporting similar initiatives across the country.

Stern said residents indicated they weren’t sufficient local journalism resources in the city, and some, including those from minority communities, felt they were misrepresented or not represented in the media. Many also wanted more accountability reporting about local officials and their decisions.

“When we all saw the AJP research, we were really compelled to come together and do something about it,” Stern said.

The Houston Endowment and Kinder are each pitching in $7.5 million, according to Stern. Meanwhile, Arnold Ventures, the philanthropic investment fund backed by billionaires Laura and John Arnold, and the journalism funder Knight Foundation are giving $4 million and $250,000, respectively, she said.

AJP CEO Sarabeth Berman said though the organization’s research focused on what residents wanted from local news, they were also able to glean some insight from employee cutbacks at Houston Public Media and buyouts at The Houston Chronicle during the pandemic.

The research made it “clear that we needed to make a significant infusion in supplementing the local news ecosystem,” Berman said. “This is not to supplant, it’s to supplement”

The funders say the newsroom will be financially sustained through donations, memberships and sponsorship revenue. Stern estimates about 40 staffers might be on board when the newsroom launches, but she notes the size will be dependent on how many people the management team eventually decide to hire. A search for the management team is currently underway.

The Associated Press receives support from the Lilly Endowment for coverage of philanthropy and nonprofits. The AP is solely responsible for all content. For all of AP’s philanthropy coverage, visit https://apnews.com/hub/philanthropy.