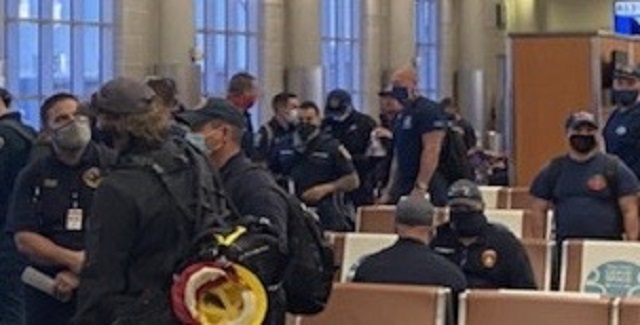 SAN ANTONIO (KTSA News) – Nearly 170 Texas firefighters, including 50 from San Antonio and surrounding areas, have been sent to California to battle wildfires.   They’ll relieve firefighters who have spent the last few weeks on the front lines.

“They’ll just help wherever they’re needed, whether that’s up North or in  Southern California,” said Joe Arrington with the San Antonio Fire Department. “I think most of our folks are going to be in the Fresno area.”

Four other SAFD firefighters who have been on the front lines were scheduled to return to San Antonio Tuesday evening.  Two others from SAFD will remain in California for another few weeks.

“They’re kind of in a managerial role, so they’re staying on for an additional 14 to 21 days,” said Arrington.

Southwest Airlines provided charter flights for the Texas firefighters heading to Sacramento and those who were scheduled to return Tuesday evening.

“At Southwest Airlines, our heart is to take care of people, which is why we have a rich history of assisting Communities recover during times of need,” said Laurie Barnett, Managing Director of Communications and Outreach, Southwest airlines. “It’s an honor and privilege to fly these firefighters to the front lines where they’re helping contain the wildfires while also bringing much-needed relief to the State of California.”