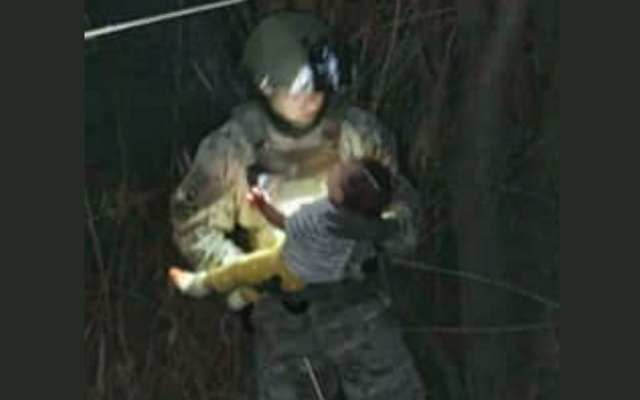 SAN ANTONIO (KTSA News) – A Texas Department of Public Safety trooper who rescued a six-month-old baby and her mother in the Rio Grande has received special recognition from Gov. Greg Abbott.

The infant and her mother were allegedly thrown off a raft by smugglers while they were crossing the river March 16.

“I heard splashing and ‘Ayuda! Ayuda! (help, help)’ from a distressed woman,” DPS Trooper Curtis Woodard told reporters Thursday at the governor’s news conference in Weslaco. “This woman is hanging onto a tree branch with the baby in her arm.  The baby’s in her arm and the water’s going over the baby.”

Woodard immediately went into the water to help them.

“I kinda fell in, grabbed the baby, held the baby like a football and helped the woman onto a tree branch,” said Woodard.

He took the child to safety and was concerned because she wasn’t crying.

“I started rubbing the chest of the baby because the baby wasn’t moving at that point,” he said.

The child started moving and crying, so he handed her to a Texas Ranger and went back to help rescue five other people, including the baby girl’s mother, who reportedly suffered a broken leg when she was assaulted by smugglers.  All were turned over to Border Patrol agents.

Abbott says this group was among 217 people who came across on rafts to Roma, Texas that day.  Most of them were children. The governor believes the woman and her baby were thrown into the Rio Grande to distract authorities.

“When law enforcement is focused on saving a child, that opens the door to the opportunity for the drug smugglers and the cartels to engage in other crimes and that’s part of what happened,” said Abbott.

Nearly a month ago, Abbott formed Operation Lone Star comprised of DPS officers and Texas Rangers to help secure the border and crackdown on the smuggling of humans and drugs.

As of Thursday afternoon, they had made nearly 600 criminal arrests and submitted 16,000 referrals of illegal immigrants to Border Patrol.

Abbott says in early March, Operation Lone Star raided a stash house in the Rio Grande Valley where officers found four undocumented immigrants and a reputed gang member wanted on two counts of rape of a child under the age of 13.    March 8, DPS Troopers arrested a man wanted for continuous sexual assault of a child.

March 14, DPS officers tried to pull over a driver who took off and led them on a chase.  When it came to a stop, the driver was taken into custody on numerous charges.

“They discovered that the male driver was smuggling illegal immigrants, including a 14-year-old child who had been sexually assaulted.  The driver also had child pornography on his phone,” said Abbott.

The governor displayed a TikTok example to show how cartels are recruiting members.

“A concern that we have is how brazen and open the drug cartels are getting in trying to recruit people here in the state of Texas to assist them in these crimes,” said Abbott.