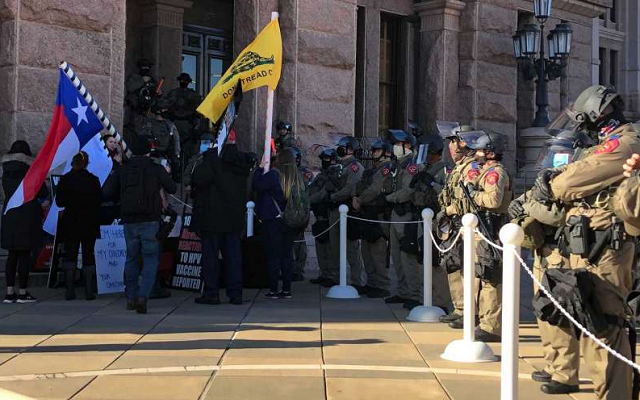 SAN ANTONIO (KTSA News) -There were a lot more Department of Public Safety troopers than protesters at the State Capitol on opening day of the 87th Texas Legislature. More than a hundred DPS officers wearing riot gear guarded all entrances to the building with some help from members of the Texas National Guard.  State troopers also patrolled the hallways.

Demonstrators, some armed with guns and rifles, protested various causes outside.  Allen West, chairman of the Republican Party of Texas,  posed for photos with members of a militia group who were wearing tactical vests and helmets.

Allen West, head of Texas GOP, poses with Texas militia members outside the Texas Capitol on opening day of the #txlege. pic.twitter.com/SumgCb1pNS

Tents were set up outside the North entrance where people were tested for COVID-19 before entering the building.  Matt Long with the Fredericksburg Tea Party was outraged about the virus test requirement.

“This is the people’s House and for us to have to jump through certain hoops and have a medical procedure to get into the building is just not right,” Long said.

He told KTSA News that going to Austin for opening day of the Texas Legislature is a tradition for him, but Tuesday, he didn’t go inside because he didn’t want to have to take a COVID-19 test.

Members of the Southern Patriot Council, some carrying rifles, spoke out against a proposed change to the so-called Castle Doctrine, which allows a resident to use deadly force to defend his or her home if the resident believes it is necessary. House Bill 196 filed by Democratic State Rep. Terry Meza would add that deadly force can be used only if the resident is “unable to safely retreat.”

“The executive, legislative and judicial branch of the government is now run by people that are going to continue to pass laws to attack gun-owning citizens of America, which is unacceptable,” said Eric Braden.

The protests remained peaceful and there were no incidents.