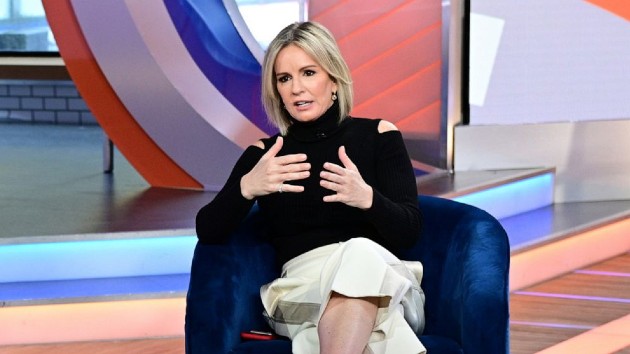 (NEW YORK) — Dr. Jennifer Ashton’s anxiety attacks started to happen after she had a severe allergic reaction to a food.

“I had a couple of episodes where I thought mistakenly that I had eaten that same food that I was allergic to,” said Ashton, ABC News’ chief medical correspondent and a board-certified OBGYN. “And even though I was not having any true physical symptoms of an anaphylactic reaction, once my mind went there, it was almost like a marble rolling off the edge of a table.”

“I started to feel dizzy. I started to feel chest tightness. My heart was racing. I was short of breath, but objectively, I was not having an allergic reaction,” she said. “And even though I recognized that I was having an anxiety attack, I was unable to stop it.”

Ashton spoke out about her own experience with anxiety during Mental Health Awareness Month to put a spotlight on a condition that is common but not always easily understood.

Anxiety is the feeling evoked when someone experiences fear of something bad happening, and it can lead to avoidance, attacks, excessive worrying or other symptoms. Everyone has anxiety sometimes, but when anxiety becomes overwhelming to the point it consistently interferes with daily life, or in the case of Ashton, prompts anxiety attacks that interfere with daily life, it can be an anxiety disorder, according to the U.S. Office on Women’s Health (OWH).

Anxiety disorders are so common they affect about 40 million American adults every year, according to OWH.

And women are more than twice as likely as men to get an anxiety disorder in their lifetime, a discrepancy not yet completely understood from a medical perspective. Some experts say it may be due, in part, to women’s changing hormones and different responses to stress, and women may report symptoms of anxiety more frequently than men.

The prevalence of anxiety underscores that it is a serious mental health concern and not something to be dismissed by doctors or patients, according to Ashton.

“What I learned from my own experience with anxiety attacks is that I think a stigma occurs in a lot of society with people thinking that it’s not real, or it’s not serious or it’s insignificant because we all know that there’s no actual situation occurring,” she said. “But none of that matters. The physical manifestations, the symptoms that I felt when I experienced these anxiety attacks, were absolutely real.”

Ashton noted the coronavirus pandemic, an anxiety-inducing global event that has now lasted more than one year, should have highlighted for people the importance of taking anxiety seriously and treating it just as one would any other medical condition.

“There was not a week that went by that I didn’t hear from patients that they were experiencing anxiety,” she said. “I think what needs to happen is a very objective assessment, not only of ourselves as individuals, but collectively, and what’s going on in the world, so then you can say, ‘This is not surprising, really … it’s common. It’s understandable.’”

What to know about anxiety disorders

Like most mental health conditions, anxiety falls on a spectrum, with differing degrees of severity.

Generalized anxiety disorder is described as worrying, “excessively about ordinary, day-to-day issues, such as health, money, work, and family,” according to OWH. Women with GAD may be anxious about just getting through the day, may have difficulty doing everyday tasks and may have stress-related physical symptoms, like difficulty sleeping and stomachaches, according to OWH.

The fourth type of disorder, specific phobia, is an intense fear of something, like heights, water, animals or specific situations, that poses “little or no actual danger,” according to OWH.

In addition to fearful thoughts, all four types of disorders also have physical symptoms that can include shortness of breath, chest tightness, nausea, sweating, numbness around the mouth and hands and hyperventilation, according to Ashton.

“There’s a spectrum of severity, so it can be mild, it can be severe. It can be intermittent or it can be constant,” she said. “Most people will admit to having anxious thoughts or feeling anxious at some point during their lives; however, people who really suffer from a true anxiety disorder find that those thoughts feelings or symptoms are occurring more frequently with greater severity.”

Ashton also pointed out that the causes of anxiety can range from the known to unknown.

“Sometimes there is an actual trigger and a clear-cut, rational explanation for where it started. For example, in my case, I had an anaphylactic reaction and experiencing that medical emergency triggered anxiety attacks in similar situations or what I thought were similar situations,” she said. “But other times, people develop an anxiety disorder and they have no known actual trigger. That doesn’t make it any less real. That doesn’t make it any less severe.”

Even with the number of people affected by anxiety during the pandemic, and with celebrities like Camilla Cabello and Prince Harry recently speaking out about their experiences, the topic of anxiety, like most mental health disorders, is still a taboo topic.

“It is definitely past time that we change that,” she said. “As a medical doctor, I literally do not look at anything that occurs from the neck up as any different than something that occurs from the neck down, so anxiety should be looked at no differently than asthma. As such, it should be managed with a full arsenal of approaches meaning support groups, talk therapy, behavioral therapy, modifying one’s environment or behavior and, if necessary, prescription medication.”

When it comes to medication, a prescription medication to treat and prevent future episodes of anxiety on a long-term basis is different than a medication like Xanax or Valium that is intended for infrequent treatment of acute anxiety, noted Ashton.

“I see this all the time in women where they think, ‘Well, it’s happening more and more frequently, so I’ll just take the medication more and more frequently,’” she said. “[Drugs like Xanax and Valium] are not meant nor are they really safe for long-term, chronic use on a daily basis. That’s why you really should be managed by a psychiatrist, by a credentialed mental health professional.”

Treatment for anxiety disorders often includes a combination of counseling and medication — and both together is often most effective. When it comes to counseling, cognitive behavioral therapy (CBT) is often used to help people change thinking patterns around their fears, according to OWH.

The differing degrees of anxiety may make it difficult for people to determine whether they should seek treatment, but what matters is how it is affecting a person individually, according to Ashton.

“There is a big difference between someone who has one anxiety attack or a panic attack per year and someone who has one per day,” she explained. “There’s a big difference between someone who can manage their anxiety and still function at home and in the workplace, and someone who has to leave meetings at work or who has to go home from celebrations or social gatherings. So whether or not you have anxiety that is interfering in your life is very subjective, but in general, it’s whether or not it’s interfering to a degree that is not acceptable to you.”

Other factors like physical activity, nutrition and mindfulness can also play a role in coping with anxiety, although less is known about the role they play in treating anxiety disorders, according to the National Center for Complementary and Integrative Health, an entity of the National Institutes of Health (NIH).

Ashton said women can look to their gynecologist or family physician as their first point of contact in discussing the possible need for anxiety treatment.

“Bring this up with your gynecologist. He or she is very familiar with dealing with anxiety disorders in patients — we see it as women’s health experts on a daily basis,” she said. “This is something that you should bring up at your next well-woman checkup with your gynecologist, with your nurse practitioner, with your family practitioner, and talk about it just like you would talk about a change in your period or if you were having daily headaches.”

Speaking of what it should be like for a person to speak about their anxiety out loud, Ashton added, “We’re just admitting something as plainly as we’re saying it’s cloudy outside.”