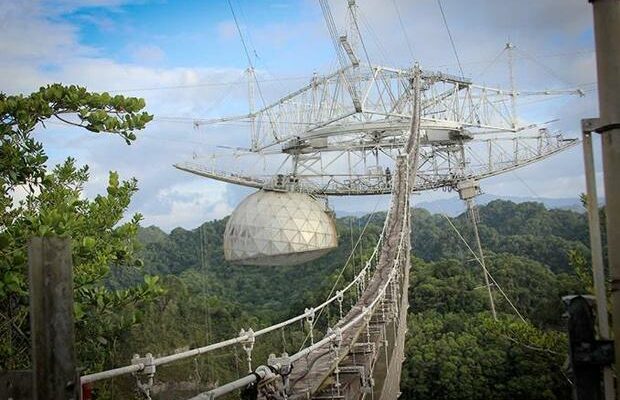 Already slated for demolition in the wake of two earlier cable failures, the sudden collapse on December 1 marked the end of the road for an observatory that once was the largest such facility in the world.

“I want to express how deeply saddened we are here,” said Ralph Gaume, director of astronomy at the National Science Foundation. “And NSF is very thankful that no one was hurt. As you know, safety has always been and continues to be our top priority.”

The National Science Foundation, which operates the Arecibo Observatory through the University of Central Florida, unveiled video of the collapse Thursday during a Zoom update with reporters.

One view, from a camera on the roof of the observatory’s control center, showed the instrument platform crashing to Earth, along with the top 60 feet of two reinforced concrete cable support towers that were ripped away. Another view came from a drone stationed just above support Tower 4 where two cables failed on August 10 and November 6.

As the drone’s camera looked on, another support cable unraveled and suddenly snapped. An instant later, the support platform began falling toward the dish 45 stories below. The drone operator managed to turn the camera in time to capture the moment of impact and the failures of the other two support towers.

“You can see the platform suspended in the center of the screen, you see off in the distance, just to the left of center, is Tower 4,” said John Abruzzo, a manager at Thornton Tomasetti, an engineering company called in before the collapse to assess the structure.

“You can see, I hope, the cables that go from the top of Tower 4 to the platform. … And so it’s those cables that fail near the tower top first. And once those fail, the platform then loses stability and starts to come down.”

The Arecibo Observatory was made up of a fixed 1,000-foot dish antenna built into a natural depression that reflected radio waves or radar beams up to the receiver array suspended 450 feet above by cables stretching from three support towers.

While the dish itself only moved with Earth’s rotation, the instrument platform featured a steerable receiver pallet that allowed astronomers to observe targets up to 40 degrees away from the telescope’s vertical axis.

Operating for more than half a century, the observatory played a significant role observing deep space targets, bodies in the solar system and, at an adjacent facility using powerful lasers, the composition and behavior of Earth’s upper atmosphere.

But on August 10, an auxiliary cable pulled free of its socket on support tower 4 and crashed down onto the dish below, ripping a 100-foot-long gash. Engineers were developing repair plans when one of the main 3-inch-wide support cables attached to the same tower unexpectedly snapped on November 6.

Because of the strain on the remaining cables, engineers concluded the system could not be safely repaired and the NSF announced on November 19 that the observatory would be decommissioned.

“We knew that it was just a matter of time,” said Abruzzo. “And it was a very dangerous and precarious situation, because (the remaining cables) could have gone really at any time.”

Engineers were assessing how to carry out a controlled demolition when the third cable snapped, bringing down the instrument platform.