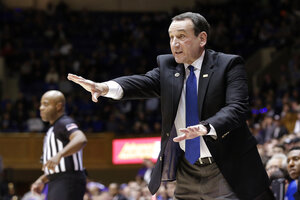 FILE - In this Nov. 12, 2019, file photo, Duke head coach Mike Krzyzewski reacts to a play during the first half of an NCAA college basketball game against Central Arkansas in Durham, N.C. Duke Hall of Fame coach Mike Krzyzewski will coach his final season with the Blue Devils in 2021-22, a person familiar with the situation said Wednesday, June 2, 2021. The person said former Duke player and associate head coach Jon Scheyer would then take over as Krzyzewski's successor for the 2022-23 season. (AP Photo/Gerry Broome, File)

DURHAM, N.C. (AP) — Duke’s Mike Krzyzewski feels the time is right to step away from a Hall of Fame coaching career. He’s also eager to get back on the court for a final run after a bumpy year.

“I’m a lucky guy,” Krzyzewski said Thursday. “And we’re going to go for it as much as possible, as much as we can this year, and we’re going to try to return this place into being what it’s supposed to be. And then we’ll be able to walk away to another part of what we’re doing.”

The winningest coach in the history of Division I men’s college basketball announced Wednesday that next season will be his last with the Blue Devils program he has built into one of college basketball’s bluebloods.

The 74-year-old Krzyzewski said he has no health concerns and wasn’t leaving in reaction to the difficulties of playing last year amid the COVID-19 pandemic or the changing landscape of college basketball. Rather, he described the decision as one that has come after years of contemplation balanced with the desire to help Duke regroup from missing the NCAA Tournament for the first time since 1995.

“I’m not going to change what I do this year, neither are those guys, my staff,” Krzyzewski said. “We’re going to go after it like we normally go after it.”

The school has also named former Duke player and associate head coach Jon Scheyer as Krzyzewski’s successor for the 2022-23 season, turning the upcoming season into a farewell tour for Krzyzewski around the Atlantic Coast Conference and the sport he has become synonymous with over more than four decades.

Krzyzewski got emotional and choked up multiple times when talking about his career, including about late athletics director Tom Butters — who hired Krzyzewski as an unknown coach from Army and stuck with him after a consecutive 17-loss seasons early in his tenure.

Krzyzewski went on to lead Duke to five national championships, most recently in 2015. He has 1,170 career wins going back to his time at Army. And 1,097 wins have come during 41 years with the Blue Devils.

Krzyzewski has led the Blue Devils to 12 Final Four appearances and a record 15 ACC Tournament championships, while his teams have spent a record 126 weeks ranked at No. 1 in the AP men’s college basketball poll.