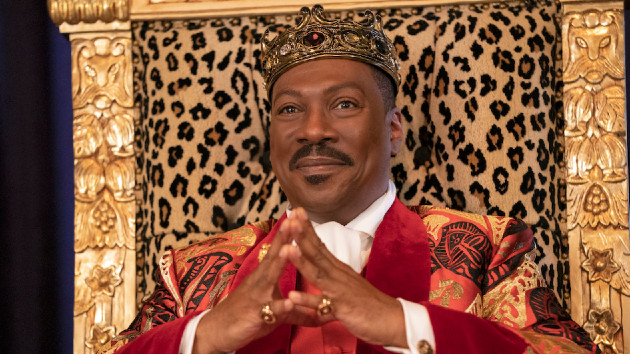 (NEW YORK) — It’s no secret that a sequel to Eddie Murphy’s 1988 comedy Coming to America has been a long time coming. In fact, Murphy tells ABC Audio that even after they decided to finally make the film, there were multiple ideas on how the story should play out.

“In the original script for this picture, Tracy Morgan is my son,” Murphy laughs. “And then…that all changed.”

If the 52-year-old Morgan playing the long lost son of Murphy’s Prince Akeem wasn’t enough — Eddie says the writers even thought about having him also play the villain in the film, which actor Wesley Snipesagreed to take on.

Like the script, which ended up evolving, Murphy explains how the potentially raunchy sequel ended up with a “clean” PG-13 rating.

“There was a scene where there was some farmers that wound up getting cut, because it was too long and it was kind of like a dirty joke at the end of it with this goat,” he says. “It was like, if we take that out of the movie, then the movie is like clean.”

“The original Coming to America is R rated and it has like maybe one or two scenes [where] the penis is cleaned and I go, “F you, F you, F you,” he says. “But this movie has none of that stuff and we took that thing out for [our PG-13 rating].”