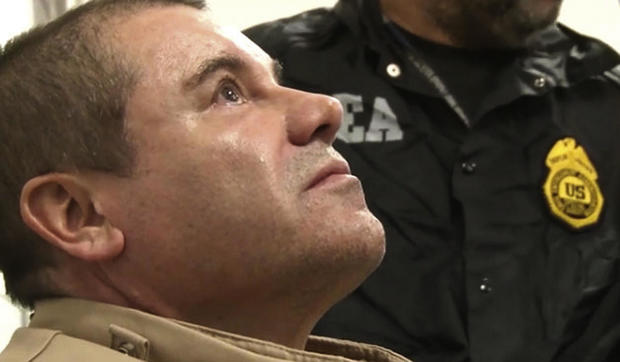 ▶ Watch Video: Son of “El Chapo” arrested in Mexico ahead of Biden’s visit
Mexico’s president said Wednesday that he would consider a request by convicted drug lord Joaquin “El Chapo” Guzman to return from the United States to complete his sentence on humanitarian grounds. The message from El Chapo was described as an “SOS” by one of his attorneys.

The Sinaloa cartel founder has appealed to President Andres Manuel Lopez Obrador for help due to alleged “psychological torment” that Guzman says he is suffering in a U.S. prison.

It was unclear if Mexico had the power to grant the request, “but the door must always be left open when it comes to human rights,” he added.

El Chapo is serving a life sentence in a maximum security prison in Colorado after being convicted in 2019 of charges including drug trafficking, money laundering and weapons-related offenses.

He is incarcerated at the “Supermax” prison in Florence, Colorado, which holds a number of high-profile inmates, including Unabomber Ted Kaczynski, Boston Marathon bomber Dzhokhar Tsarnaev, Sept. 11 conspirator Zacarias Moussaoui and Oklahoma City bombing accomplice Terry Nichols. The facility is so secure, so remote and so austere that it has been called the “Alcatraz of the Rockies.”

According to one of his lawyers, Jose Refugio Rodriguez, Guzman is unhappy with the harsh prison conditions including isolation and a lack of sunlight.

The message, described as “an SOS,” was transmitted via one of Guzman’s lawyers in the United States as well as his family, Rodriguez said.

He hopes to return to face outstanding charges and complete his sentence in Mexico under a prison agreement between the two countries, Rodriguez told AFP.

On Tuesday, Mexican Foreign Minister Marcelo Ebrard had downplayed the chance of any government intercession in favor of Guzman, who twice escaped from jail in his home country.

“Frankly I don’t see any possibilities for him, but I’m going to review it with the prosecutor’s office,” Ebrard told reporters.

One of El Chapo’s sons, Ovidio Guzman, was arrested by Mexican security forces this month in an operation that left 29 people dead and sparked a dramatic shootout at an airport in the city of Culiacan.

The U.S. Department of State had been offering a reward of up to $5 million for information leading to the arrest and/or conviction of Ovidio Guzmán-López.

Ovidio Guzmán had not been one of El Chapo’s better-known sons until an aborted operation to capture him three years ago. That attempt similarly set off violence in Culiacan that ultimately led President Andrés Manuel López Obrador to order the military to let him go.