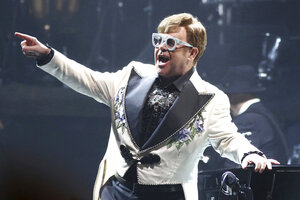 John begins his final run of dates in North America in Philadelphia on July 15, finishing with a three-night engagement at Dodger Stadium in Los Angeles on Nov. 17, 19 and 20.

Next year, John has two shows in Auckland, New Zealand, on Jan. 27 and Jan. 28, and soon-to-be-announced dates in Australia before the epic five-year tour formally concludes in Stockholm, Sweden, on July 8, 2023.