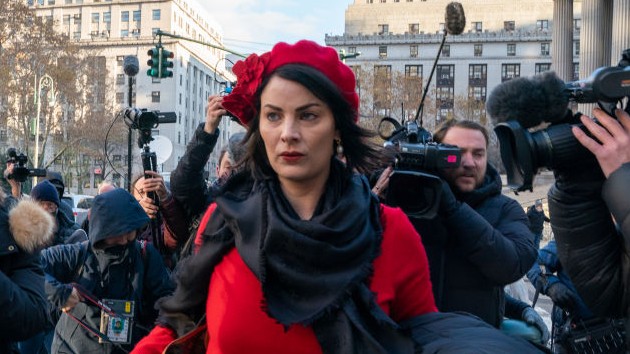 (NEW YORK)  — Sarah Ransome, a woman who has accused notorious serial sex offender Jeffrey Epstein of sexual assault, opened up on “The View” on Tuesday about how Ghislaine Maxwell, Epstein’s longtime companion, allegedly aided in her abuse.

In her new memoir “Silenced No More: Surviving My Journey to Hell and Back,” Ransome, who grew up in both South Africa and the United Kingdom, describes meeting Epstein when she was 22 years old shortly after arriving in New York City as an aspiring fashion student. She was “befriended” by another young woman at a nightclub, Ransome said, who called her just days later to arrange her introduction to a “fantastic” philanthropist who, she was told, believed in supporting young talent.

During their first meeting, she said, Epstein promised Ransome to help her gain admission to the Fashion Institute of Technology. It wasn’t long, Ransome said, before she was invited to stay on Epstein’s private island in the Caribbean. It was during that trip, she said, that Epstein raped her for the first time, trapping her in a cycle of abuse that, she said, would last for the next nine months.

Ghislaine Maxwell — Epstein’s former girlfriend and longtime associate — faces a six-count indictment for allegedly conspiring with and aiding Epstein in the recruitment, enticement and trafficking of underage girls between 1994 and 2004. Ransome, as well as other alleged victims of Epstein, have accused Maxwell of orchestrating Epstein’s alleged sex trafficking scheme and recruiting young women and girls for him to assault.

Ransome sued Epstein and Maxwell in 2017 for alleged sex trafficking. The suit was settled in 2018 with no admission of wrongdoing. In court papers, Maxwell denied being responsible for Epstein’s actions and argued that as a 22-year-old, Ransome could not be a victim of sex trafficking, but was a sophisticated, college-educated young woman engaged in a consensual relationship.

In a case that does not include Ransome, federal prosecutors say Maxwell played a “key role” in a multi-state sex trafficking ring, in which she allegedly “befriended” and later “enticed and groomed multiple minor girls to engage in sex acts with Epstein,” allegedly being “present for and involved” in the abuse herself on occasion. Maxwell has denied any involvement in or knowledge of Epstein’s abuse and has pleaded not guilty to the charges against her.

Ransome said she was “led by complete fear” as she remained in Epstein’s orbit, visiting him both in New York and in the U.S. Virgin Islands.

As soon as Ransome felt it was safe to escape, she said, she boarded a plane to the United Kingdom to reunite with her mother.

In August 2019, one month after Epstein was charged with sex trafficking and conspiracy in New York, he died by apparent suicide while being held in federal custody at the now-shuttered Metropolitan Correctional Center in lower Manhattan.

“She broke the sisterhood bond,” Ransome said of Maxwell.