ESPN announces extension for Berman on his 66th birthday 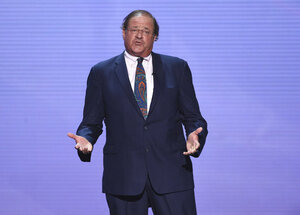 File-This July 18, 2018, file photo shows shows Chris Berman appearing at the ESPY Awards at Microsoft Theater in Los Angeles. Berman will continue to host “NFL PrimeTime” after agreeing to a new contract with ESPN. The multi-year agreement was announced on Monday, May 10, 2021, which is Berman's 66th birthday. “We've been working on it for awhile and this was the perfect time to do it,” Berman said during a telephone interview. “ESPN has been almost two-thirds of my life. I'm honored that what I do still works.”(Photo by Phil McCarten/Invision/AP, File)

Chris Berman will continue to host “NFL PrimeTime” after agreeing to a new contract with ESPN.

The multiyear agreement was announced on Berman’s 66th birthday Monday.

“We’ve been working on it for awhile, and this was the perfect time to do it,” Berman said during a telephone interview. “ESPN has been almost two-thirds of my life. I’m honored that what I do still works.”

Berman has been an integral part of ESPN throughout its history after joining the network a month after its launch in September 1979. Besides being one of the original “SportsCenter” anchors, he has been a key part of the network’s NFL and baseball coverage.

He hosted “NFL PrimeTime” with Tom Jackson from 1987 to 2005 on ESPN and then starting again in 2019 when it returned on the ESPN+ streaming service. Berman — who also hosted “NFL Countdown” from 1985 to 2016 — teamed up with Booger McFarland for “PrimeTime” last year when Jackson could not travel due to the coronavirus pandemic.

Berman approached ESPN President Jimmy Pitaro when ESPN+ started about the possibility of reviving “PrimeTime.” Berman said seeing the success of “PrimeTime” on the streaming service has mirrored watching the growth of ESPN.

“The fact that I will get to do it again this season is something I have enjoyed the most,” he said. “I love being able to help build another entity with it this time being in the streaming world.”

Berman said it remains to be determined who will join him on “PrimeTime” during the upcoming season.

Berman was the 2010 recipient of the Pro Football Hall of Fame’s Pete Rozelle Radio-Television Award and has been the master of ceremonies for the Hall’s induction ceremony since 1999.

“Quite simply, Chris Berman has personified ESPN’s success for more than four decades,” Norby Williamson, ESPN’s executive vice president and executive editor, said in a statement. “Fans respond to his authentic love of sports, his ability to savor and capture the big moments, and his on-air style that reminds us how live games can truly be equal parts essential and fun. We are delighted Boomer’s magical ride at ESPN will continue for years to come.”