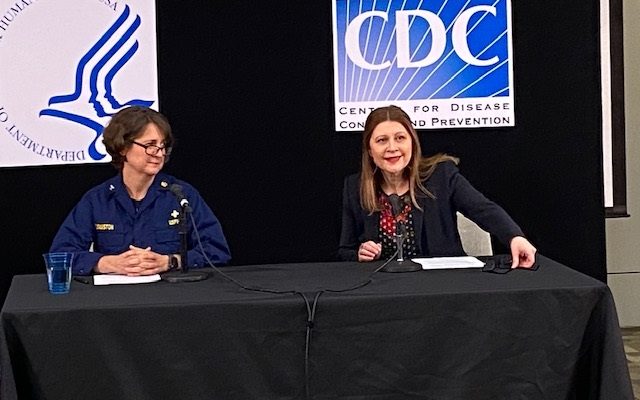 SAN ANTONIO (KTSA News) – A plane carrying American evacuees from the center of a coronavirus outbreak in China is scheduled to land in San Antonio around 12:30 this afternoon.

The plane is heading here after stopping to refuel at Travis Air Force Base in California. Fox News reports that one of the passengers showed possible symptoms of the novel coronavirus, which include fever, respiratory problems and coughing.

Jennifer McQuiston with the Centers for Disease Control and Prevention told reporters Thursday that all passengers would be medically evaluated at Travis and if they showed so much as a fever, they would be taken to a hospital for further testing and would not be allowed to continue the trip to San Antonio.

Joint Base San Antonio-Lackland is ready to quarantine as many as 250 evacuees from Wuhan, China where the coronavirus outbreak started.

They stay at a hotel on the base surrounding by Federal Marshals.

Fox News also reports that another passenger from China on a plane held in Vancouver was showing symptoms possibly related to the novel coronavirus.

SAN ANTONIO (KTSA News) – Evacuees fleeing from China amid the novel coronavirus outbreak could arrive in San Antonio as early as Friday morning. It’s not known how many passengers will be on the flight, but Joint Base San Antonio-Lackland is prepared to quarantine as many as 250 people.

The flight carrying passengers who are asymptomatic will stop at Travis Air Force Base in California before continuing the journey to San Antonio. During that time, the evacuees will be medically evaluated again and checked for possible symptoms of the coronavirus.

“Anybody who does have a fever or other symptoms will be pulled off and kept at Travis,” said Jennifer McQuiston, deputy director of the division of high consequence pathogens and pathology at the Centers for Disease Control and Prevention.

Symptoms of the coronavirus include coughing, sneezing and shortness of breath, but a fever would be a red flag. McQuiston says any passenger with a fever would be taken to a hospital for further evaluation and would not continue the trip to San Antonio.

Those who are coming to JBSA-Lackland can expect to be quarantined for fourteen days.

“The housing is a hotel-like facility that is separated from other areas, so we can put a fencing perimeter around it and we can make sure that we’ve got federal marshals there who are patrolling that perimeter,” said McQuiston.

A federal contractor will provide services for those who are quarantined at Lackland.

“That includes bringing them food, taking care of their rooms, linens and laundry. All of that is being handled by personnel who are trained on how to go in there,” said McQuiston.

The workers would be wearing personal protective equipment.

The employees also could wear gowns and respirators, if necessary.

“As long as a person is wearing personal protective equipment, they’re not considered exposed to a passenger or evacuee who is staying there,” McQuiston said.

If any of the evacuees become ill while they’re quarantined at Lackland, they’ll be taking to a San Antonio hospital, but McQuiston would not disclose which facilities have been selected to take in these patients. She cited patient confidentiality.

The novel coronavirus has killed more than 400 people and sickened at least 24,000 in other parts of the world.   There are 12 confirmed cases in the United States, but none in Texas.