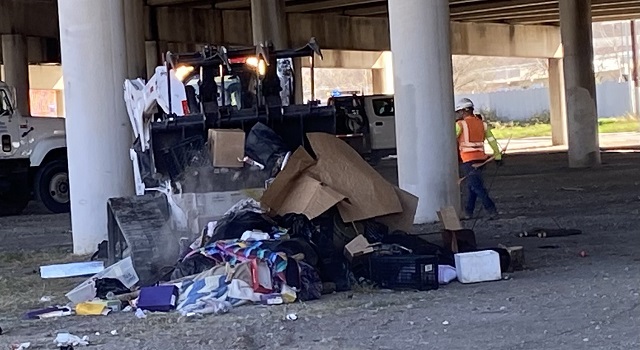 SAN ANTONIO (KTSA News) – It didn’t take long for the tent city under IH 37 near McCullough in  downtown San Antonio  to pop up again shortly after TxDOT moved in with heavy equipment and tore it up last month.  Now, crews are getting ready to move in and clear up the site again soon.

Christian Assistance Ministry and other nonprofits Tuesday are hosting an event called “Love Does” for the downtown homeless population.  CAM President/CEO Dawn White-Fosdick says they’ll provide food, clothing and other items to people living on the streets and under the expressway, while providing information on shelters and other services that area available to them.

“We just want to give the clients, not only advance notice, but give them some options and information on what they can do as they try to reclaim their lives and hopefully, work toward getting off the streets,” White-Fosdick told KTSA News.

Some organizations, including SAMMinistries, have been going into the encampments to talk to people, provide resources.and try to sign them up for opportunities to get into a shelter, an apartment or a home.  While a few people living on the streets have fallen on hard times after losing a job, most of the homeless people CAM deals with on a daily basis are struggling with substance abuse or mental health issues.  White-Fosdick says most have been living on the streets for more than 10 years and transitioning to a shelter is difficult.

“They’ve become used to it and they’re scared and they’re struggling with a multitude of issues,” said White-Fosdick. “It may take months and a lot of relationship building to get someone like that to be willing to change their entire life.”

Many don’t want to or can’t adapt to the strict rules at shelters for the homeless.

“For someone with paranoid schizophrenia, being in a room with 100 people may not be doable, so how do we create options that would help someone like that  move into a small apartment or housing option?” asked White-Fosdick.

Those are some of the issues they deal with as they continue trying to get the homeless off the streets.  Another option is low-barrier shelters.  While most places require guests to be sober and pass a drug test, low barrier shelters provide overnight stays for people as they are.

CAM has been trying to warn the homeless that TxDOT crews are coming soon to clear out the encampment under IH 37 near McCullough.

“We put notes in our sandwich and food bags that we give the clients daily because we don’t want any of this to be a surprise.  We want to help the clients pick up their items, clean up, and have a plan for where they’re going to move,” said White Fosdick.