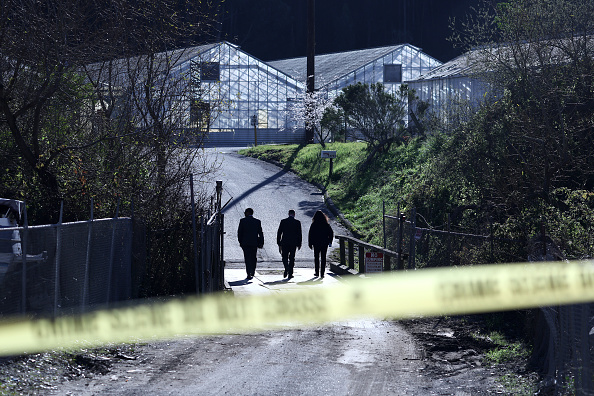 HALF MOON BAY, CALIFORNIA - JANUARY 24: FBI agents arrive at a farm where a mass shooting occurred on January 24, 2023 in Half Moon Bay, California. Seven people were killed at two separate farm locations that were only a few miles apart in Half Moon Bay on January 23. The suspect, Chunli Zhao, was taken into custody a few hours later without incident. (Photo by Justin Sullivan/Getty Images)

Police said evidence indicates the mass shooting in Half Moon Bay, California, that left seven people dead and one seriously wounded was likely an incident of workplace violence.

The only known connection between the victims and the suspect is that they may have been coworkers, San Mateo County Sheriff Christina Corpus said in a news conference Tuesday morning.

The shootings took place in two locations on Monday. The first location, Mountain Mushroom Farm, is where the suspect, identified by the sheriff as 66-year-old Chunli Zhao, was believed to have been employed. There, authorities found four people dead and one wounded. The second location was also a mushroom farm, about a mile away, where officials found three people dead.

The identities of the victims have not been released because officials are still working to notify families. Corpus said those killed were six men and one woman, and they were a mix of Hispanic and Asian descent. The man who was wounded is out of surgery and in stable condition, she said.

Public information officer Eamonn Allen said that he could not comment on whether the victims were random or if they had been specifically targeted. He also did not share what other information led authorities to suspect it was an incident of workplace violence.

Authorities said the gun used in the shootings was a semiautomatic handgun, and they said it was legally purchased and owned.

Zhao remains in custody after having been arrested by members of the sheriff’s department. The district attorney for Half Moon Bay said that an arraignment will be held Wednesday afternoon, and said that charges have yet to be determined but will likely involve counts of homicide.