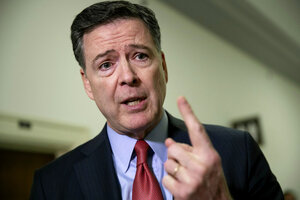 WASHINGTON (AP) — Former FBI Director James Comey faces questioning Wednesday from the Republican-led Senate Judiciary Committee about his role in leading the bureau’s investigation into ties between the 2016 Trump campaign and Russia.

Comey is the latest high-profile former official from the FBI or Justice Department to testify in an investigation led by the committee chairman, Republican Sen. Lindsey Graham of South Carolina.

The questioning of Comey, conducted with the 2020 election just weeks away and as the committee prepares for confirmation hearings for President Donald Trump’s Supreme Court nominee, underscores the extent to which the FBI’s investigation four years ago into potential coordination between Trump’s campaign and Russia remains front-and-center in the minds of Republican lawmakers, who see an opening to rally support for the president and cast him as the victim of biased law enforcement.

A Justice Department inspector general report did not find evidence of partisan bias and concluded that the investigation was opened for a legitimate reason, but it did reveal significant problems in how the FBI set out to eavesdrop on a former national security adviser to the Trump campaign. Republican lawmakers have seized on those errors to cast broader doubt on the Russia investigation, and have released a series of declassified documents that they say supports the conclusion of a flawed probe.

That includes information that national intelligence director John Ratcliffe, a former Texas congressman and Trump loyalist, said he has declassified even though he said he does not know if it is true. In a letter to Graham, Ratcliffe said that in late July 2016, U.S. intelligence agencies obtained “insight” into Russian spycraft alleging that Hillary Clinton, the Democratic presidential candidate, had “approved a campaign plan to stir up a scandal against” Trump.

But Ratcliffe added that American intelligence agencies do “not know the accuracy of this allegation or the extent to which the Russian intelligence analysis may reflect exaggeration or fabrication.”