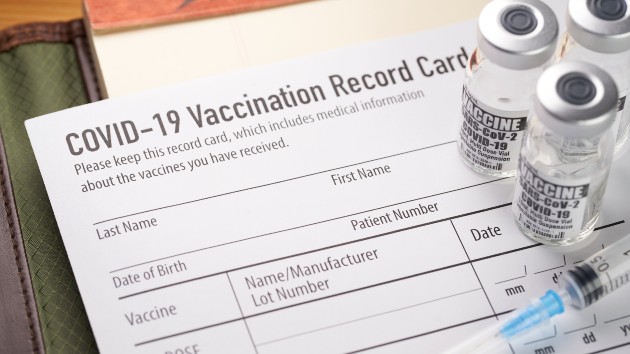 (NEW YORK) — The Johnson & Johnson COVID-19 vaccine has been pitched with one major advantage over its counterparts since it was authorized for use: It requires just one dose. But with the exponential spread of the highly transmissible delta variant, questions have arisen over whether recipients might need to “top off” their immunity against the now-dominant strain in the U.S. with a second shot.

Although the J&J vaccine’s efficacy at protecting against symptomatic COVID-19 in clinical trials was less than the two-dose mRNA vaccines from Pfizer and Moderna, it showed 100% effectiveness against hospitalization and death.

Recent research suggests that mRNA vaccines, such as the Pfizer and Moderna, appear to hold up against the delta variant as long as you’ve been fully vaccinated with two doses.

Pfizer reported Thursday that initial data showed that receiving a third dose, six to 12 months after being fully vaccinated, may give more protection and promised to have data to publish in the coming week to ask the Food and Drug Administration and Centers for Disease Control and Prevention to recommend a third dose.

Johnson and Johnson has put out its own data suggesting that their single dose also holds up against the dominant variant, but it was a small study and people are thinking more is more.

The promising preliminary data suggests that the J&J vaccine offers good protection against the delta variant.

In a laboratory experiment, researchers analyzed the blood of 10 people who had been vaccinated with the Johnson & Johnson vaccine, and tested it against multiple concerning variants, including delta.

They found the vaccine appeared to work against the variants, shown by “neutralizing antibody titers” and other immune system response indicators.

What level immune response is required to achieve protection is still open science, but the experiment offered promising clues, if not definitive proof of real-world protection.

The news offers some measure of reassurance for the more than 12 million Americans who have received the J&J vaccine; it’s also prompting some medical experts to reevaluate what role a “booster” shot might have — whether it’ll still be needed, and if so, when, and for whom.

“The new data does in fact change my opinion,” said Dr. John Brownstein, an epidemiologist from Boston Children’s Hospital and an ABC News medical contributor. “We try as much as possible to stick to the science when it comes to vaccine strategy, and overall this is really encouraging news.”

All vaccines available in the U.S. have so far shown to be both safe and effective for at least up to eight months. Brownstein said that receiving a booster is likely safe, and looks forward to further data. In the meantime, this new data lends some hope to those who received the J&J vaccine, that for now, they still have protection.

“We want to wait for data to support any kind of vaccine strategy that we recommend,” Brownstein said, highlighting the importance of uniform recommendations backed by data.

The science has yet to be settled, experts say.

“I think there are still open questions for those who are immunocompromised,” Brownstein said. “Talk to your doctor — especially if you’re in the high-risk category.”

Dr. William Schaffner, professor of medicine in the division of infectious diseases at Vanderbilt University School of Medicine, explained that “when talking about people who are immunocompromised, that includes a large spectrum of disease, and there are no studies at the present time to indicate that an additional dose will benefit you or what sort of reactions you might get from an additional dose.”

For now, Schaffner firmly stands against the idea of an additional booster shot without formal recommendations. He emphasized that the CDC is yet to recommend any booster, under any circumstances at the present time.

“People are making these recommendations on the basis of hope: hope that it would work and hope there wouldn’t be any adverse events. But there certainly has been no formal study to support it at this time,” Schaffner added.

In fact, following Pfizer’s announcement, the FDA and the CDC released a joint statement urging caution on the need for a booster shot, as still only 47.7% of the U.S. population is fully vaccinated at this time.

“Americans who have been fully vaccinated do not need a booster shot at this time,” the agencies said in the statement Thursday. “FDA, CDC, and NIH (National Institutes of Health) are engaged in a science-based, rigorous process to consider whether or when a booster might be necessary.”

While many experts remain split on the issue of boosters, it’s not for lack of confidence in the single-shot vaccine doing its job. Dr. Vin Gupta, a critical care pulmonologist and faculty at University of Wisconsin Medicine, said an added booster shot on top of the single J&J vaccine would essentially be an additional layer of protection.

Gupta advocated for a booster not because he thinks the J&J shot doesn’t work well, but rather, to ensure level protection for all vaccines across the board. He stands by that stance.