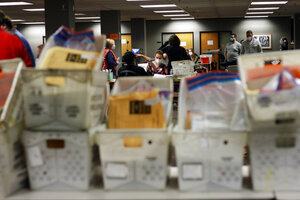 WHY AP CALLED WISCONSIN FOR BIDEN:

Democrat Joe Biden has flipped the state of Wisconsin, a crucial presidential battleground that President Donald Trump carried by less than a percentage point in 2016.

The Associated Press called the race for Biden after election officials there said all outstanding ballots had been counted, except for a few hundred in one township and a small number of provisional ballots around the state. The former vice president’s lead there is now so great that there is no way the remaining votes would allow Trump to catch up.

Trump’s campaign has requested a recount, which a trailing candidate is allowed to do under state law if a race is within 1 percentage point. Statewide recounts in Wisconsin have historically changed the vote tally by only a few hundred votes. Biden leads by .624 percentage points out of nearly 3.3 million ballots counted.

“The President is well within the threshold to request a recount and we will immediately do so,” Trump campaign manager Bill Stepien said in a statement.

Wisconsin is a key state in the tight contest between Trump and Biden to secure the 270 electoral votes needed to win the presidency. Democrats long considered it part of their “blue wall” — a trifecta of states that also includes Pennsylvania and Michigan — which served as a bulwark in presidential elections.

But in 2016, a combined total of about 80,000 voters spread across those states narrowly handed Trump the presidency. He carried each state by less than a percentage point.

With Biden winning Wisconsin, all eyes are now on Pennsylvania and Michigan, with the fate of the presidency hanging in the balance. Those two states, which are still too early to call, could prove crucial in determining who wins.

For much of Election Night and into the early morning hours of Wednesday, Trump held a lead in Wisconsin. However, there were large number of absentee ballots in Democratic-leaning Milwaukee County that remained to be counted.

At 4:40 a.m. EST, election officials released results showing that 69,000 absentee ballots from the county had put Biden in the lead, wiping out Trump’s 31,000-vote lead. Over the next few hours, Biden’s lead continued to grow.

Though Trump has requested a recount, there is little historical precedent to suggest the results of the contest will be overturned — particularly given Biden’s margin over Trump.

Electoral research conducted by the AP found there have been 31 statewide recounts since 2000. Three of those changed the outcome of the election. The initial margins in those races were 137 votes, 215 votes and 261 votes.

Among all 31 recounts, the largest shift in results was 0.1%, in the 2006 race for Vermont’s Auditor of Accounts. This was a low turnout election in which the initial results had one candidate winning by 137 votes. The candidate eventually lost by 102 votes, for a swing of 239 votes.

The average shift in the margin between the top two candidates was 0.019%.