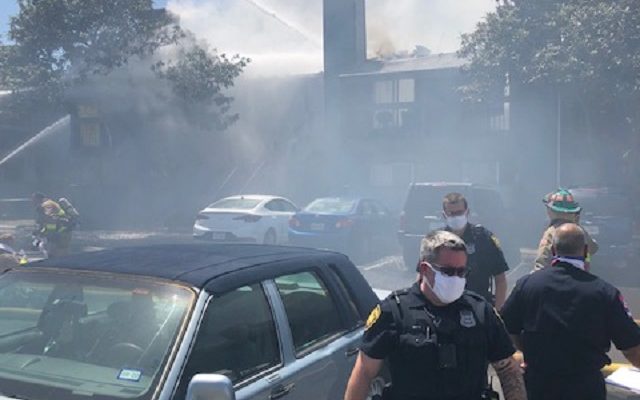 SAN ANTONIO (KTSA News) – Firefighters, wearing 60 to 70 pounds of gear, battled a 3-alarm fire in the North Side near Churchill High school as the temperature in San Antonio soared to 106 degrees Monday afternoon.

The fire started around 2:30 pm on the first floor of a building at the Parliament Bend Apartments and quickly spread to the second floor with flames shooting through the roof.

Douglas Herring grabbed his dog, his cat and his wallet and ran out when someone pounded on the door and yelled “fire.”  He and his wife, Melissa Petry, were standing under a tree  holding their  fur babies as they waited for word that it was safe to return to their apartment.

“This is “Gizmo,” Herring said as he held up his little dog.  Their Siamese cat named “Pepper” was in a kennel that his wife had just purchased on her way home from work .

“Pepper went under the bed and I had to lift the mattress and some random guy helped me get her out.  He was really nice,” said Herring.

A man, who identified himself as Ray, saw firefighters rescue some dogs from a burning apartment.

“The apartment downstairs was on fire and the family was very upset because their dogs were in there.  The firemen pulled out three dogs, so that was a good thing,” said Ray.

Joe Arrington with the San Antonio Fire Department says management would try to relocate displaced tenants in vacant apartments at the complex on Parliament at Blanco Road.

“If that’s not possible, the Red Cross will help out,” said Arrington.

SAFD brought its rehab bus to the scene to provide firefighters respite from the heat.  VIA also sent buses to the location where displaced residents could sit in an air-conditioned space and wait for word on when or if they would be allowed to return to their damaged apartments.