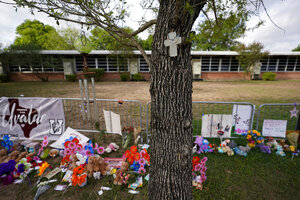 FILE - A cross hangs on a tree at Robb Elementary School on June 3, 2022, in Uvalde, Texas, where a memorial has been created to honor the victims killed in the recent school shooting. Two teachers and 19 students were killed. As public pressure mounts for more information on the deadly Uvalde school shooting, some are concerned that Texas officials will use a legal loophole to block records from being released — even to the victims' families — once the case is closed.(AP Photo/Eric Gay, File)

SAN ANTONIO (KTSA News) — A lot of anger,  frustration and unanswered questions during an emotional meeting of the Uvalde City Council Thursday.

As members of the community continued to press city leaders for more answers about the mass shooting at Robb Elementary School more than a month ago, they were told there is nothing new the council can reveal.

At one point, Mayor Don McLaughlin said he had letters from District Attorney Christina Busbee and the Texas Department of Public Safety telling him that if the council said anything and released it, they would be subject to criminal charges.

McLaughlin says the DA is the person holding all the keys to the kingdom:

“She’s the one that’s telling everybody they can’t talk. But yet she’ll go on the press and say, I don’t have an investigation going on.”

McLaughlin says he can’t tell anyone who’s in charge of the investigation because he doesn’t know and he’s not getting any information from the agencies investigating the shooting.

“It’s either got to come from the governor or the attorney general and I’m not getting answers from either.”

The Mayor apparently invited the DA to Thursday’s council meeting but she declined.

Arredondo has been practically invisible since the May 24th massacre in which a gunman killed 19 students and 2 teachers at Robb Elementary.

His response to the shooting has been under intense scrutiny and his failure to attend council meetings could mean his time on the board will be short. City Council can vote him out if he misses a third straight meeting.