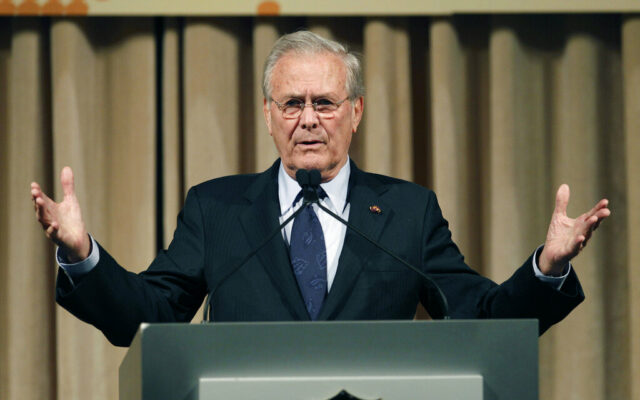 FILE - In this Oct. 11, 2011, file photo, former U.S. Secretary of Defense Donald Rumsfeld speaks to politicians and academics during a luncheon on security in rising Asia, in Taipei, Taiwan. The family of Rumsfeld says he has died. He was 88. (AP Photo/Wally Santana, File)

By ROBERT BURNS National Security Writer
WASHINGTON (AP) — The family of former Defense Secretary Donald Rumsfeld says he has died. He was 88. The two-time defense secretary and one-time presidential candidate had a reputation as a skilled bureaucrat and visionary of a modern U.S. military, but it was soiled by the long and costly Iraq war. Regarded by former colleagues as equally smart and combative, patriotic and politically cunning, Rumsfeld had a storied career under four presidents and nearly a quarter century in corporate America.