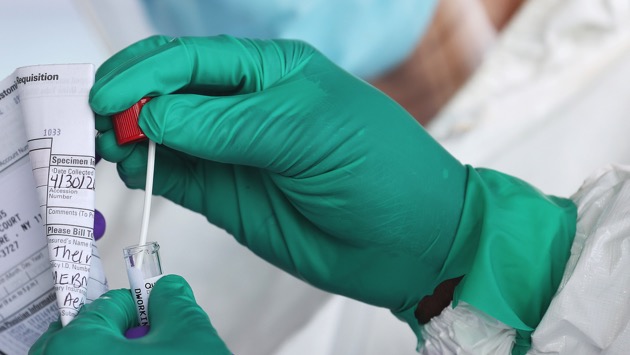 (NEW YORK) — Amid pushback from some public health officials on new Centers for Disease Control guidance for individuals who have tested positive for COVID-19, which does not require a negative test to end isolation after five days, Dr. Anthony Fauci, the nation’s top infectious disease specialist, said changes to the guidance are being considered.

“You’re right there has been some concern about why we don’t ask people at that five-day period to get tested. That is something that is now under consideration. The CDC is very well aware that there has been some pushback about that,” Fauci told This Week anchor George Stephanopoulos on Sunday.

He continued, “Looking at it again, there may be an option in that, that testing could be a part of that. And I think we’re going to be hearing more about that in the next day or so from the CDC.”

The CDC issued new guidelines for those who test positive on Tuesday, recommending a five-day isolation period, if asymptomatic at that point, followed by five days of masking when around other people.

The CDC said in a statement: “The change is motivated by science demonstrating that the majority of SARS-CoV-2 transmission occurs early in the course of illness, generally in the 1-2 days prior to onset of symptoms and the 2-3 days after. Therefore, people who test positive should isolate for five days and, if asymptomatic at that time, they may leave isolation if they can continue to mask for five days to minimize the risk of infecting others.”

“Regardless of what CDC says, you really should try to obtain an antigen test (I know – easier said than done) and confirm it’s negative prior to leaving isolation and quarantine. There’s not a scientist or doctor I’ve met yet who wouldn’t do this for themselves/their family,” Adams tweeted.

The revised guidelines come as the number of COVID-19 cases in the U.S. reaches record levels. The CDC recorded more than 580,000 cases in the U.S. on Thursday, a pandemic record. That number shattered Wednesday’s record of about 488,000.

However, Fauci said Sunday the time has come to focus less on case counts, as “infections become less severe.” Instead, he said, “it is much more relevant to focus on the hospitalizations.”

As cases have skyrocketed, hospitalizations and deaths have not apparently followed the trend. Fauci expressed optimism about emerging evidence that the omicron variant could be less damaging, although he cautioned “hospitalizations are often late, lagging indicators.”

Even with the rising case numbers, Fauci said he believes it’s the correct decision to return children to in-person schooling after the holiday break as “it’s very clear there are really serious effects about” children not having a physical presence — and because most teachers are vaccinated and children 5 and up are eligible for COVID vaccinations.

“I plead with parents to please seriously consider vaccinating your children, wearing masks in the school setting, doing tests to stay,” he added. “I think all those things put together, it’s safe enough to get those kids back to school, balanced against the deleterious effects of keeping them out.”

Despite some promising data on omicron, Fauci warned there remains a heightened potential for stress on the nation’s hospitals and health care workers.

“We’ve got to be careful about that. Because even if you have a less of a percentage of severity, when you have multi, multi, multifold more people getting infected, the net amount is, you’re still gonna get a lot of people that are going to be needing hospitalization. And that’s the reason why we’re concerned about stressing and straining the hospital system,” Fauci told Stephanopoulos.

Still, Fauci expressed hope that what he described as a “severe surge” will peak within a few weeks.

“One of the things that we hope for, George, is that this thing will peak after a period of a few weeks and turn around,” Fauci told Stephanopoulos. “We’ve seen that happen in South Africa with a head of major surge, but as quickly as the surge went up, it turned around.”