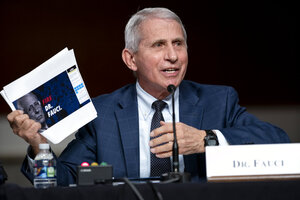 ▶ Watch Video: Vice President Kamala Harris tests positive for COVID-19, CDC report estimates over 60% of Americans have had the virus
Washington — Dr. Anthony Fauci, the president’s chief medical adviser and the director of the National Institute of Allergy and Infectious Diseases, has decided not to attend the upcoming White House Correspondents’ Dinner after making a personal assessment about the risk of COVID-19, he told CBS News on Wednesday.

Fauci, 81, said everyone has to make decisions for themselves, and what is right for him may not apply to everyone else. He applauded the White House Correspondents’ Association (WHCA) for taking precautions against spreading the virus, but said each person needs to weigh their own risks and benefits. The WHCA is requiring guests to be fully vaccinated and present proof of a negative same-day antigen test before attending Saturday’s dinner.

Fauci also said comments he made during an interview with PBS’ “Newshour” on Tuesday, in which he said the U.S. is “out of the pandemic phase,” were being misconstrued to imply that he said the pandemic has ended.

“We certainly cannot say the pandemic is over,” Fauci told CBS News. “It is not over.”

Fauci stressed that the U.S. is still dealing with a pandemic, even as the country has entered a new phase over the past several months. The difference is that it’s not as “acute” and “accelerated” as earlier in the pandemic, which saw more than thousands of deaths and hundreds of thousands of new cases each day. Fauci described where the U.S. is now as a “decelerated” and much more “controlled” phase.

He pointed to the number of therapeutics and vaccines that are available, including Paxlovid, which he believes will make a huge difference as it becomes more readily accessible. Improved treatments and vaccines are why the U.S. is in much better shape than other parts of the world still dealing with more serious COVID-19 situations, like China and Hong Kong, he noted.

But “that does not mean we are out of the woods,” Fauci added, pointing out that the number of cases is starting to “creep up” again. He said Americans must be on guard, and urged people to be vigilant and to prepare for new surges and variants, should they arise. The U.S. needs to avoid another spike in hospitalizations, he said.

Fauci did attend the Gridiron dinner earlier this month, another journalism event after which a number of attendees tested positive for COVID-19.

President Biden, 79, plans to attend the correspondents’ dinner, the White House said Tuesday. Press secretary Jen Psaki said the president makes his own risk calculus for events like this in consultation with his physician.

“Obviously, this weekend, he’ll be attending the White House Correspondents’ Dinner,” Psaki said. “It’s an opportunity to honor the work of all of you and many of your colleagues and to talk about the importance of journalism in the world. That’s an event he’s attended many times in the past, and he made a decision, through consultations, that it was an event he could attend and wanted to attend again.”

Kathryn Watson contributed to this report.